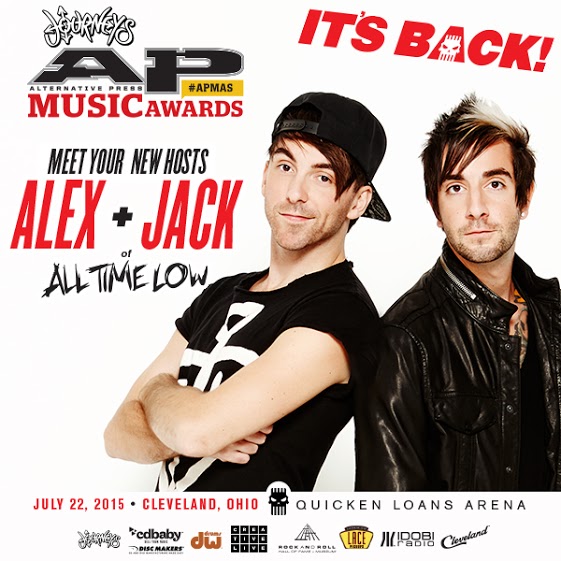 After last year’s majorly successful AP Music Awards, Alternative Press have announced that this year’s awards will take place on July 22, 2015 at Quicken Loans Arena in Cleveland, OH. This year, the hosts are idobi’s own Full Frontal radio hosts, Alex Gaskarth and Jack Barakat! Check out the details from Alternative Press below!

Last summer, rock music’s newest and most popular awards show — Alternative Press Magazine’s AP Music Awards — made a grand entrance with once-in-a-lifetime performances, a star-studded red carpet and unprecedented support from dedicated fans around the world. Now, the AP Music Awards are back and ready for more, and if last year’s show serves as any indication, 2015’s event is gearing up to be even bigger and better than its spectacular inaugural experience.

This year’s AP Music Awards, sponsored by Journeys, will take place on July 22, 2015, held again in Alternative Press Magazine’s hometown of Cleveland, Ohio,  a city being touted as a top travel location for 2015 by key travel blogs and publications such as Fodor’s and the LA Times. Last year, the APMAs solidified Cleveland as an undeniably important spot on the musical map, adding to the list of outstanding events previously held at the esteemed Rock And Roll Hall Of Fame And Museum.

Last year, the APMAs featured amazing appearances and performances from artists as diverse as Fall Out Boy, Paramore, Joan Jett & the Blackhearts, Ice-T and Body Count, Joe Perry of Aerosmith, the Misfits, Slash, Bring Me The Horizon, Jonathan Davis of Korn, Billy Corgan of Smashing Pumpkins, Coolio and many more.  Watch all the highlights here.

Aside from the 6,500 plus attendees in 2014, millions of people were introduced to the APMAs on July 21, 2014 via AXS TV. In addition, to the award show trended No. 1 worldwide for 24-plus hours through Facebook and Twitter with an overall 2.5 billion combined impressions.

Don’t miss the 2015 AP Music Awards! Check back to www.altpress.com/apmas over the coming weeks for new announcements and information.

The APMAs have had a huge impact on marking the alternative scene’s credibility in rock music after only one year. This year, with the prediction of expansion from an amphitheater sized crowd to moving to the home of the Cleveland Cavaliers, the APMAs seem to be living up to a fully charged music awards show. Be sure to get your tickets, and head down to Cleveland this summer for the biggest alternative music event of the summer.