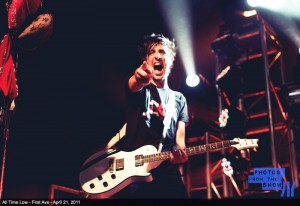 All Time Low will be heading out across North America this summer on the Gimme Summer Ya Love Tour with a revolving door of support including Mayday Parade, The Starting Line, We Are The In Crowd, Cartel, The Cab, and Brighter. Notably, this will be The Starting Line’s first full tour since they announced they were taking a break in early 2008, though they have played a handful of one-off shows in the meantime. The dates can be seen below.

w/ The Starting Line, Cartel, The Cab, We Are The In Crowd
August 26 – Pittsburgh, PA – Stage AE

w/ Cartel, The Cab, We Are The In Crowd
August 27 – Niagara Falls, NY – Rapids Theatre

Presale tickets will be available Monday, May 13 at 3pm exclusively through All Time Low’s fanclub the Hustler Club at tixx1.artistarena.com/alltimelow. Tickets will go on sale to the general public later this month.

Tags: All Time Low, Brighter, Cartel, Mayday Parade, The Cab, The Starting Line, We Are the In Crowd