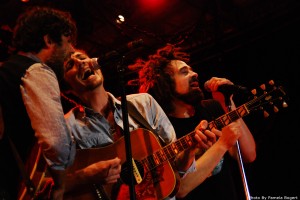 Adam Duritz has a lot to talk about. As the vocalist for Counting Crows, he has helped sell millions of albums. Now that the band is leaving Geffen Records after nearly 20 years together, Duritz dishes about the second “Traveling Circus & Medicine Show” (in which Counting Crows is participating), the current state of the music industry and more.

A: It’s really fun. I thought the first show was sloppy, but I knew it would be. But it was cool. I had a blast with it.   This is a really complicated tour to put together and we did it in one rehearsal. After the first night it was like, zooming.

Q: Can you elaborate on the dynamics of the show?

A: You just play so many types of different music. Here you play your songs, play on a hip-hop song with NOTAR, sing background vocals for your friends. It’s just really fun to do. I think it’s really good for an audience. At this concert you hear the music you love, you hear the bands playing it in a whole new way, and it’s like a whole revitalization of what we’re doing. You get to see your favorite musicians influencing other bands’ sounds. It produces  music that you maybe thought you’d never like at all, music that you might really enjoy. For example, in Kansas City last night, a Counting Crows audience was up on its’ feet with their hands in the air when NOTAR was playing “Matador,” probably the heaviest song of the concert.

Q: Why is that significant?

A: Because music is different from movies or other kinds of art forms. It’s like your personal cool. You wear your music, like a style of clothing. When you listen to music, you’re in effect investing in who you are. That being said, there’s this genre split between all of these different kinds of music. But not among musicians. Musicians just love music — it doesn’t matter what kind. Another reason the mixed dynamic matters is that it’s  hard to interest people in new stuff nowadays. Part of that is due to the record companies’ influence. Augustana’s new record is so spectacular, but the record company wants another “Boston,” and it’s failing to hear how good some of these songs are because it wants it to be a ballad. Then again,  record companies tend to take the last hit you had as a starting point for future songs.

Q: Are you talking about Augustana’s upcoming album?

A: Yes, it’s not out yet. I just heard it. It’s the best record they’ve made. Unfortunately the reality is that the people at the record companies are going to fly out the window in five minutes. People don’t want to spend any money on something unless they’re sure of it, and the only thing they’re sure of is that “Boston” was a hit, so they are trying to find something that sounds exactly like “Boston.” But nobody’s  songs will sound the same a couple of years later. Look at The Beatles. Every single song sounds nothing like the song before it.

Q: Do you think that’s a problem with a huge part of the industry now?

A: Yes. I think that the reason it’s a problem is because the record companies don’t have a workable model for how to sell music. They’ve never really had a good model.   The truth is they’ve failed with 99 percent of the music out there. It’s always been a terrible hit-and-miss business. It’s still the same system they had fifty or sixty years ago: bribe the radio stations and record stores to put it up front. But there are very few record stores left! And nobody is carrying around a transistor radio or boombox on their shoulder anymore. People only listen to the radio in your car, maybe at home. Most music tends to be on an iPod, which means that it has to be put into a downloadable form, which opens up the whole question of record companies and the Internet. The record companies don’t like the Internet because the Internet happens to be free. I don’t know why the record labels won’t treat the Internet like a radio station by granting a free download online. If the people love the song, they will buy the record it’s on.

Q: Wouldn’t there be disadvantages or at least risks to doing that?

A: It’s possible. The way that they currently handle the system costs so much money. It’s so expensive to bribe the radio stations and record stores, and the record companies’ overhead costs are so massive that they can’t afford to take risks. I suppose they’d rather not release a record than be the people who pushed for a release of something that failed. The other problem is that there’s no visionary at the top of any record company.  There are no Geffens who own record labels anymore. No matter how smart the guy at the top is, he is beholden to a major corporation. He’s probably a perfectly smart guy, but he’s not a music guy. He’s an accountant for his company and his job is to make sure that his money-losing record company doesn’t lose too much.

A: You can do whatever you want.   You still have to do marketing, and you can hire people for that, but you don’t have to buy the real estate.   You don’t have to buy the billboard. The Internet is the world’s largest free billboard. If Augustana were independent, it’d be set for life right now. The songs are getting a great response in concerts with people who have never heard them before. Augustana could be selling the record tomorrow, if it wanted to, because it’s done. It could sell it for $5, maybe not even that.

Q: So do you believe we should move to a new model?

A: My feeling is that there are more ideas out there in the world and that we should use. Right now we’re sort of trapped with the model we have, unfortunately.  But the world never stops moving. The future is always ahead and there’s no need to hang on to the past.

Q: Do you think that this tour is a step in what is perhaps a better direction for the industry?

A: I think so. I think people don’t have a lot of money nowadays and they need to get more for their money.   They need to get a full show. On this tour people get a four-hour concert with a ten-minute intermission. In other words, they get their money’s worth. As for me, I’m having a lot more fun. I think we’re introducing people to new music and I think that’s what’s important.

Q: What should fans attending this year’s tour expect?

A: Songs like you’ve never seen before. This is a show like no other. Life gets repetitive, and I feel like if you’re an audience member, that fact alone makes it worth it to check out this show. I love doing it. I think that everybody who is playing is exactly where they want to be. Hopefully that makes it the same kind of experience for the audience, although it doesn’t always. Counting Crows shows have always been like that. People don’t always get the song they want. We would make the setlist up in the afternoon, so that no one ever really knew what they would get. This show is similar in the sense that it is a common experience for our fans who either come willing to expect the unexpected. In that sense, it’s not much of a departure.