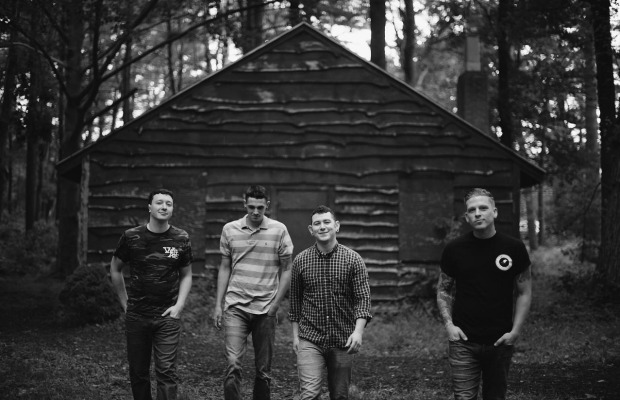 A Loss For Words have announced the first of their final shows together as a band in 2015, accompanied by Pentimento, Speak Low If You Speak Love, and Like Pacific. The band announced their disbandment last summer. The tour kicks off on March 27th in Providence, RI and wraps ups on April 4th in Jacksonville, FL.  Tour dates and a statement from the band can be seen below. 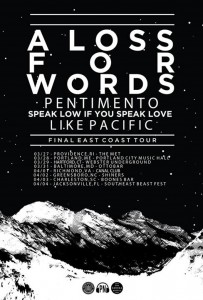 “So as most of you know, we have announced that 2015 will be the last year for A Loss For Words. We’ve all come to a mutual agreement that it’s time for us to begin new chapters in all of our lives. We aren’t breaking up, nobody is quitting, we have just decided that we all want to explore the other possibilities that may lay ahead for us. Matty has referred to it as “retiring”, which is as suiting a thing to call it as any. And while it is sad, and frankly scary for us to think about, we can finish this amazing journey with full hearts knowing that we have experienced and achieved much more in our run as a band than these regular dudes from South of Boston could ever have dreamed of, or set out to accomplish.

In the last 15 years, we have gone from playing backyards, to playing basements in New Jersey, to being able to visit twenty-plus countries on four continents, all because you guys had faith in us as musicians, and because you’ve supported us enough to make our passion and childhood dreams a surreal possibility. We are endlessly grateful for every day we got to write and play our music for you.
The great thing about us calling it a day on our own terms, is that we get to decide how we would like to ride out into the proverbial sunset. And we plan on going out in as spectacular a way as we are able to do. We are in the process of recording our last full length record, and with over a dozen new songs of what I believe to be our best material yet.

Considering after we call it a day we know we are going to miss the freedom of the road, we’ve decided that we want to visit most everywhere that we’ve already gone one last time. We want to give you guys the proper thank yous and goodbyes that you deserve for the support you gave that enabled us to come through your areas in the first place. We are going to start off 2015 with an east coast tour down to Florida, playing all of our favorite east coast states one last time, and throughout the year will tour the UK/Europe, and Asia before our final tour as a band. one last full US tour before A Loss For Words becomes a funny little footnote on pop punk’s epic ass.

So after thousands of shows, and ten plus releases, we will spend this last year saying goodbye. We hope that anyone that has ever bought one of our records, t-shirts, come to a show, stage dove, or hell, even downloaded our stuff illegally and said we kinda suck will come out and party with us one last time. We’ve met so many amazing people who have made so much of a positive impact in our lives that deciding to spend 2015 this way is the best way we could to show our gratitude.

And as we’ve always said, we’ve never had fans, just friends. We love you all and thank you for being just that.”

– Mikey, Matty, Marc-E and Christian; A Loss For Words

Tags: A Loss For Words, Like Pacific, Pentimento, Speak Low If You Speak Love