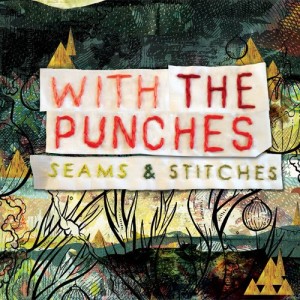 After over a year spent recovering from, according to the band’s blog, the “bad decisions, member changes, [and] scumbag booking agents” that inspired the release of It’s Not The End Of The World last March, it was expected that listeners would see some growth in the members of With The Punches both as people and musicians. A symbol of overcoming changes and setbacks, Seams & Stitches does just that, establishing the band as one that will not succumb to the challenges they’re faced with but instead will conquer and grow from them. Their debut full-length makes for a solid introduction to the band and should get fans excited for the big things the future is bound to have in store for With The Punches.

Opening track “Riverside” gets the album off to a shaky start — the song begins sounding disorganized and amateur, and despite significant improvement by its end, it amounts to nothing more than an average punk song. Thankfully, “Home In A Lighthouse” is a much better display of what the band has to offer, showing off their trademark high energy and a much more professional-sounding charisma. “Harvard On The Hudson” and “New York Minute” stand out for similar reasons, but vocalist Jesse Vadala really brings the tracks home with some of the most impressive vocal performances on the record. Songs like “I Told You Already” and “Letting Go” add some variety to the record, showcasing the band’s lighter side while still maintaining the high energy that resounds throughout the album. “Bad Pennies” keeps up the lighter vibe, with its catchy guitar riffs and confident lyrics making it an instant favorite.

Inevitably, despite the album’s notably strong moments, there are a few rough patches along the way. In addition to the record’s rough start, “Don’t Panic” was particularly disappointing because of the overly-prevalent drums distracting from all the other elements of the song. Luckily, by the end of the record, the band’s positive energy prevails, unquestionably leaving listeners satisfied. “Cags” smoothly leads into the album’s closing title track, and together the songs blend the band’s punk roots with lighter vocals to form a medley of the sounds you loved in their predecessors. Ultimately, With The Punches manage to overcome the minor bumps in the road to end Seams & Stitches on a high note, leaving fans old and new craving more from the band.