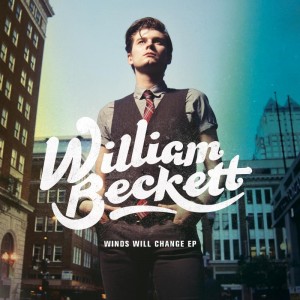 Although William Beckett is no stranger to the scene, with years under his belt as the lead vocalist for The Academy Is…, it seems as though we will never know what to expect from him next. Each album with the band was drastically different from the rest and his solo work has proven to follow the same pattern — or lack thereof — thus far. With his appropriately-titled sophomore EP Winds Will Change, Beckett faces us as a more poppy version of himself. That being said, Winds Will Change delivers just as many sensitive croons as it does simpler, catchier, and less impactful songs.

The EP opens with the light-hearted “Great Night,” a track as simplistic lyrically as it is musically. While this song’s feel-good vibes may bide well on a summer mix, it lacks any other element to make it memorable and is best described as a watered-down version of something we’d find on Panic At The Disco’s Pretty Odd. Luckily, this EP is a microcosm of Beckett’s career in that each track is drastically different from the next. Follow-up track “Warriors” is much easier to get behind, featuring the darker vocals that Beckett does best. With a chorus that is simultaneously haunting, danceable, and sexy and lyrics that are much more thought provoking than the repetition of “I had a great night,” “Warriors” is easily the strongest track on Winds Will Change.

The second half of the EP is just as fragmented as the first. Third track “Scarlett (Tokyo)” is almost as danceable as “Warriors,” but much less impressive otherwise. Like the opening track, this song is underwhelming and bares a chorus of an overly simple, repeated phrase. Beckett redeems himself again, however, with closing track “Dig A Hole,” the most introspective track on the EP by a landslide. “Dig A Hole” delivers a chorus of dreamy lyrics paired with gentle vocals, showcasing some of the greatest aspects of Beckett’s songwriting.

With “Warriors” and “Dig A Hole” being some of the best tracks of Beckett’s career, it is hard to digest how unimpressive the other half of the EP is. With any luck, what comes next from Beckett will be slightly more consistent and a lot more revealing of his darker side. Winds Will Change makes it apparent that although happy pop music isn’t what Beckett does best, he still has it in him to provide music with deeper subject matter and more impressive musicality.