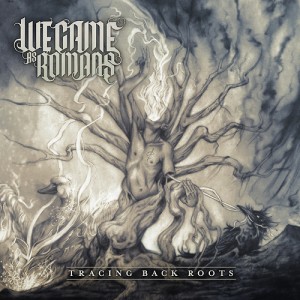 Since their inception eight years ago, We Came As Romans have become one of the most prominent players in the metalcore scene. Now on their third album, the band whose claim to fame was their skilled blend of metal and symphonic elements returns on Tracing Back Roots with a lot of what their previous fans loved as well as a few surprises thrown in – the most notable innovation being screamer David Stephens now sharing clean vocal duties with Kyle Pavone. While the album feels a bit stale at points, altogether it proves to be cohesive, uplifting, and appealing.

The album opens with lead single “Tracing Back Roots” in which the band lyrically traces back their roots as Stephens begins with “Eight years ago” before continuing to describe the trials and tribulations of being touring musicians. Unfortunately, if this album were meant to be an insightful reflection into the band’s past, that concept disappears as the rest of the songs consist of generic lyrics common in metalcore. “Hope,” which is carried over from the deluxe reissue of their previous album Understanding What We’ve Grown To Be, is all about refusing to give up and standing your ground. These are admirable concepts, but their method of delivery through the same defiant growls has become increasingly overused in the genre. Besides lyrics, the band also recycles their song structures. The opening track, as well as “Ghosts” and “Present, Future, and Past,” are heavy slabs of mostly screaming and relentless guitar riffs before the energy cuts out two minutes in for Pavone’s polished vocals to float over sparse orchestral instrumentation before picking back up again. The individual parts aren’t lacking, as Pavone’s falsetto particular shines on the latter song; however, reusing the same framework multiple times feels lazy.

On the other hand, Stephens’ new clean vocals provide a refreshing change in this album. He debuts on the second track “Fade Away” with an animalistic, aggressive tone similar to The Story So Far’s Parker Cannon, but he smooths it out in subsequent tracks. “Never Let Me Go” and “A Moment” both lean more towards rock than metal, making the band extremely accessible to people who weren’t fans of their previous material, plus both songs contain the catchiest choruses on the album. It’s also immediately obvious that Stephens’ clean voice complements Pavone just as well as his screams, if not better. “I Survive” is another interesting track, starting with a disco-influenced riff over which Pavone and Stephens harmonize with each other before adding The Almost’s Aaron Gillespie into the mix of unique vocals. The album closes with “Through the Darkest Dark and Brightest Bright,” which is basically classic We Came As Romans. The song features blistering screams, orchestral strings, virtuosic riffs on top of chugging guitars, and sweeping clean vocals.

Overall, Stephens claims MVP on Tracing Back Roots. His clean vocals are an enjoyable addition to the band’s repertoire, and are sure to attract new fans for We Came As Romans. This album definitely contains some of the band’s best music to date, but hopefully next time around they will continue to work on improving their musicianship so we’re not hearing the same thing over and over.