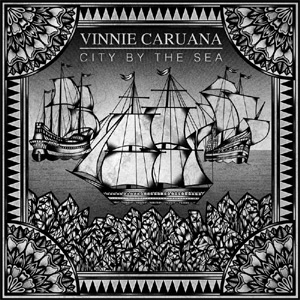 A frontman breaking out from his band to do a solo album is nothing new, but sometimes a risk. For I Am The Avalanche’s Vinnie Caruana, this move was a long time coming, having played shows with just him and a guitar whenever he seemed to have some downtime. The result is City By The Sea, a 6-track EP filled with gruff vocals and personal lyrics encircled by lush layers of sound.

The record focuses heavily on themes of love, death, and gratitude. Opener “Somehow The World Keeps Turning” focuses on inner struggles that occur through life and features a nice touch of piano rounding out the song. “Boy, You’re In Heaven” ties in both love and death, with lyrics about not getting the chance to say goodbye to a loved one but still having the memories you shared. Delicate additions like violin and keys bring out the vulnerability of the song.

Having played the song live for quite some time now, fans will be more than pleased with the recorded version of “To Be Dead And In Love”. The song got a bit of a makeover in the studio with a fuller sound and the vocals a little more soothing than normal, bringing new life to the recording. “City By The Sea” is an ode to Caruana’s hometown of Long Beach keeping him grounded despite the fact he’s dealing with the past, while “If I’m A Battleship, Then You’re The Northern Lights” serves as thank you to his friends and fans. Ending the EP on a high note is “Kingwood”, a fast-tinged, upbeat love song sure to be clapped along to.

Straddling between somber and happy, City By The Sea offers diversity not only in lyrics but song arrangement as well. Producer and long-time friend Steve Choi was able to make Caruana’s songs more than just a man with a guitar, adding in plenty of new elements to keep an ear out for. With multiple projects at his hands, there is no sign of Caruana slowing down and his first foray into solo music surely won’t be his last.