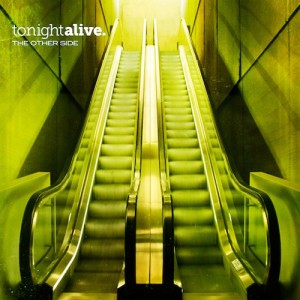 Since their last release, a few of Tonight Alive’s many accomplishments include signing to Fearless Records and playing two full Warped Tours consecutively. Despite some cancellations due to health issues, their relentless hard work has paid off and the band is currently enjoying a whirlwind of success far beyond their native Australia. As their first official Fearless Records debut (2012’s What Are You So Scared Of was a re-release), The Other Side is their most heavily anticipated record to date. Luckily, the new record doesn’t disappoint as the band displays a newfound maturity and confidence accumulated over the past two years. These twelve tracks of passionate, driven pop rock are guaranteed to launch the band onto an entirely new level of success.

The band’s recent growth is immediately evident in opener “The Ocean.” More rock than pop, the track has a noticeably darker vibe than their previous record – something that persists throughout the majority of the album. The main contributor to this new direction is vocalist Jenna McDougall’s increased usage of the lower part of her range as she opens up about the health problems that have plagued her recently. The track is a potent balance of aggression and vulnerability. That vulnerability quickly morphs into defiance on the next track “Don’t Wish.” Despite the gentle piano at the beginning, McDougall is fiercely unforgiving as she asserts “I know it’s cold and lonely / But I’m not your one and only.” The emotion of the track is bolstered by lead guitarist Whakaio Taahi, who transitions between lines of sustained notes or rapid virtuosic riffs when needed. His proficiency continues into catchy, energetic single “Lonely Girl,” which is instantly recognizable from the opening riff. Drummer Matt Best also makes his mark with tight, diverse rhythms that manage to complement each song perfectly.

“Hell and Back” features the most of McDougall’s deeper vocals. The track feels heavily cathartic as McDougall sings, “Cause I went to hell and back just to be where I am today,” backed by hauntingly high “ooh’s.” Infectious pop ballad “The Other Side” addresses high school nostalgia in true pop punk fashion while its emphatic chorus explains the meaning of the album title, referring to the album’s reflective nature. The band picks it up again with “The Fire,” the most aggressive song on the album. The track nears an almost metalcore-esque feel thanks to a chugging rhythm provided by bassist Cam Adler and rhythm guitarist Jake Hardy, as well as Taahi’s relentless speed on a fretboard. Combining the best of these two tracks produces “Complexes,” one of the best songs on the record. It’s a mid-tempo track with catchy, low-key verses and a soaring chorus that culminate into a compelling bridge showing off McDougall’s enormous range to its fullest extent.

The album begins winding down with “Come Home,” a straightforward pop song that’s enjoyable but lacks the intensity of the tracks before. “No Different” and “Say Please” serve as two final dark, minor-key attacks before the band eases into closer “You Don’t Owe Me Anything.” Starting off as a simple, poignant piano ballad before the rest of the instruments join in, its message of closure and acceptance form the perfect conclusion for a record that consists of anger and regret, but ultimately positivity.

What separates Tonight Alive from the rest is the extremely high level of musicianship evident from all five members. Their individual talent yet seamless cohesion as a band are captured perfectly on The Other Side. McDougall’s narrative lyricism also makes the record autobiographical, but intensely honest and relatable. Having already gained attention across the entire alternative music scene thanks to opening for acts as diverse as Pierce the Veil and The Story So Far, Tonight Alive are sure to only continue growing exponentially in popularity with the release of this new album.