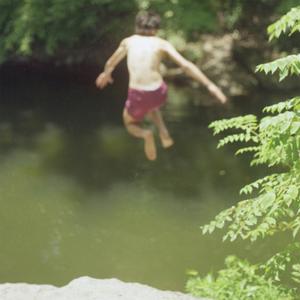 Disclaimer: Whenever, If Ever is a love/hate record. If you “get it,” you will be completely floored by its use of vast atmospheric textures and timbres, as well as its nostalgia factor. If you don’t, it will be a whiny, fragmented, enigmatic record that will be a struggle to listen to.

It is important to understand the artistic intention and influence behind The World Is A Beautiful Place’s unconventional style. The band is heavily influenced by ‘90s emo and post-rock; instruments are used as textures to create emotional atmospheres, while vocals are generally desperate and lack technicality. There is always a constant tension building – fueled by frantic, disconnected parts, time signature changes, tempo augmentations, and the thorough use of dynamics to contrast hopelessness with serenity. Whenever, If Ever is an aria with multiple movements that should each be carefully considered.

“Blank #9” opens the record with solely ambient instrumentals. E-bowed, reverberating guitars sustain over feedback and other noisy textures. Swelling clean guitar plays, accompanied by a melancholy cello. The drums keep a steady march that gently carries the song. TWIABP clearly want to emphasize their musicianship on this record. Opening with an instrumental, although potentially seen as a bit pretentious and self-indulgent, may be necessary in order to establish an appropriate context for a record of its kind.

“Heartbeat In The Brain” features a palm-muted guitar intro that is percussive by nature. Drums kick in with a prog rock feel as an almost tacky synth leads over violin and clean guitar. The vocals are unsuspecting at first, as David Bello sports a Modest Mouse type of vocal – wavering, desperate, and smart. There are a few mathy time and tempo changes as well as half-screaming vocals a la Cap’n Jazz. The instrumentals generally remain noodly and progressive until the post-rock “breakdown” takes over, providing a nice sense of bliss and resolution after such a scattered song.

“Fightboat” opens with a ska-sounding trumpet lick that wails over the predictable American Football clean guitar riffs. The synth is annoying and almost invasive at this point, yet it provides a haunting dissonance as it carefully clashes with raspy vocals that would make Jeremy Enigk proud.

“Picture of a Tree That Doesn’t Look Okay” is one of the more notable, detailed songs.   It opens with a peaceful atmosphere, as subtle guitar scrapes, reverb, and feedback simultaneously sustain and decay. There are many time changes, as well as creative doubled vocals that urge me to sing American Football’s “Never Meant” over the existing melody. The song gets punky at the end and a few new suspecting influences (The Get Up Kids, Thursday) shine through on the echoed, screaming vocals. Gritty guitar chords and emphatic drums accent every hit and drive the song to its desperate ending. Delayed harmonics ring like bells and gradually fade out.

Songs like “You Will Never Go To Space” and “Layers of Skin We Drag Around” do not really contribute much to the album. They act as generous interludes but lack depth and passion- as if they were thrown on the album last minute to enhance its avant garde repertoire.

Closing track “Getting Soda” clocks in at seven minutes and ends the album on an abrupt yet grandios note. Distorted bass and arpeggiated guitars carry into an eventual pseudo-breakdown with screaming vocals. There are unexpected tempo changes and spontaneous instrumental pauses that give it a mathy, disjointed vibe. The song ends with a giant buildup of snare rolls, crescendoing as the band sings, “The world is a beautiful place / But we have to make it that way / … / And if you’re afraid to die, then so am I.” The only resolution is a final strung out chord that marks an end to the fear of death.

Whenever, If Ever is an overwhelming album. It is not catchy and contagious, nor will it fully make sense until you look at each song in context to the whole work of art. But it should be critically examined and appreciated for its instrumentals, ambient intricacies, and homage to a very underrated genre that stems from the early ‘90s. The band has refocused their sound and reached a new level of comfort with their songwriting. Music aficionados and musicians themselves will eat it right up; your average consumer will dispose of it as “experimental” and weird. It is not for everyone, but it should certainly be respected.