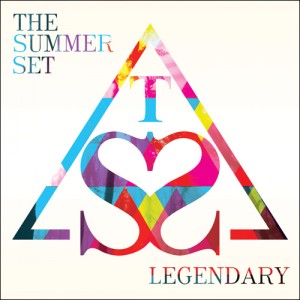 The Summer Set are back and better than ever with their third full-length Legendary, their first release through Fearless Records. The Scottsdale, Arizona-based quintet have made a name for themselves with their classic melodies and upbeat pop-rock style. Being a mid-April release, Legendary is the perfect predecessor to summer. The carefree and upbeat melodies are made for sunshine and car rides with the windows rolled down. The album embodies youth and living life in the moment but also, as the title suggests, growing up and becoming better. It is having both your head in the clouds as well as your feet on the ground. The twelve tracks on Legendary are not only catchy and melodic pop-rock songs that have radio potential, but also are lyrically thoughtful enough for fans to get attached to.

“Maybe Tonight” opens the album with a steady beat and dives right into an infectious chorus ridden with synths and group vocals. Vocalist Brian Dales sings in the second verse, “Maybe someday we’ll be somebody/ Maybe someday starts tonight,” giving the track a hopeful feeling and setting the uplifting mood for the rest of the album. The youthful energy continues with second track “Jukebox (Life Goes On).” Keeping with the carefree attitude, Dales sings the chorus — “Life goes on/ We got all night/ If you got rock and roll/ You’re gonna be alright” — over a prominent drum beat. The keyboard in the background gives the song a gentler melody to back the clear vocals and big harmonies.

“Heart on the Floor” is a light-hearted, rhythmic track driven by a steady piano and Dales’ easygoing vocals. Dia Frampton guest stars on the song and her high range and unique voice adds depth to the harmonies while providing a strong feminine counterpart to Dales. Because “Heart on the Floor” is one of the more laid back tracks on the album, it manages to show a more casual side of the band. “The Way We Were” and “7 Days” are the typical pop tracks about love and seem a bit more reminiscent of the band’s debut album Love Like This. Needless to say, the songs are just as addicting as the rest and the strong imagery in their lyrics makes them all the more memorable.

Dales discusses chasing dreams and finding yourself in the soaring track “Someday.” The keyboard and less generic drum pattern keep the track full sounding and light. While some songs on Legendary can seem somewhat artificial, this track feels a little more real as the verses talk of finding the feeling belonging and figuring out what you truly want. The last few tracks of the album, “Someday,” “Rescue,” and “Legendary,” are the most expressive of the record and together they illustrate the real idea of being legendary.

The final song and title track “Legendary” is the most intimate song on the album. The honest internal thoughts expressed in the lyrics make it the most relatable, especially as it deals with feelings of insignificance. In the chorus, the lyric “I’ve spent too many nights watching How I Met Your Mother alone,” is surprisingly poignant and touches on the real emotion of loneliness that everyone faces. “Legendary” is the thesis that closes the record with the right amount of sharp honesty and gentle inspiration that “Maybe Tonight” just begins to introduce.

Legendary is more complex an album than one might think at first listen. While a general theme is being youthful while recognizing that you are growing up, the album also describes friendship, love, making mistakes, and chasing dreams with the energy and enthusiasm the band is known for. There are a few synthetic-sounding tracks here and there, but the lyrics add a bit more feeling and the chorus is always too catchy to dislike. Though some songs are not as deep or meaningful as others, there is always an impressive melody and some memorable lines, leaving the album without any truly weak spots. This is definitely a record you will want to put on repeat this summer as you strive for legacy.