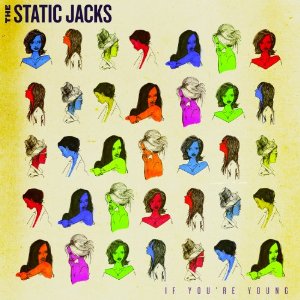 The Static Jacks’ debut album If You’re Young is a record you might want to add to your music catalogue before the summer rolls in. The New Jersey natives signed to Fearless Records in 2011, but are nothing at all like any of the bands that Fearless has produced in the past.  If You’re Young sounds like it could have been recorded in your parents’ basement and is latent with influences of Brit-pop and 70’s punk, genres that aren’t typically associated with the label that launched Mayday Parade, Sugarcult, The Maine, and the Plain White T’s to stardom. Any of the songs on this album could be placed between “Rockaway Beach” by The Ramones and “Let’s Dance To Joy Division” by The Wombats on a mix for summer night drives.

The overarching themes of youth rebellion and falling in love paired with a nostalgic air are enough to make anyone feel like a kid again. One of the album’s stronger tracks, “This Is Me Dancing,” gives listeners the chance to experience secondhand awkwardness as lead vocalist Ian Devaney sings about his desire to dance with a girl, despite his inability to dance at all. If “This Is Me Dancing” hits a bit too close to home, the next track, “Relief,” will bring you some relief of your own, with some of the catchier guitar riffs and more powerful vocals found on the album.

While almost every track on If You’re Young has the potential to be the soundtrack to your summer, none truly stands out as an obvious anthem. The downfall of the record is the fact that it’s too consistent. After multiple listens, your memory of the album will be a lot like your memories of your last summer vacation – you know it was fun, but it’s all a bit hazy. While it’s awesome that The Static Jacks are bringing a sound found in different eras and on distant continents to this scene, they’ve failed to add much of an original influence to the music. If you can move past that, or if you just love the Brit-pop and 70’s punk that The Static Jacks recreate,  If You’re Young is absolutely worth a listen.

Click here to buy If You’re Young on iTunes.