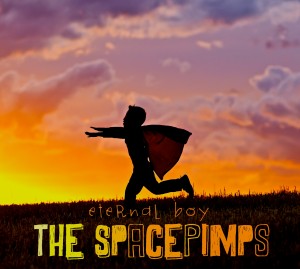 Whether you’re in the mood for some emotional and hard-hitting lyrics, moshing and singing along to some quality pop punk, or a bit of nostalgia, The SpacePimps’ Eternal Boy  can certainly get you your fix. They combine a unique variety of old school and more contemporary pop punk to create a sound that’s been irresistible to fans of the genre since their formation eight years ago, and they’ve taken the genre by storm yet again with their third studio release. Although the songs within the album lack some musical distinction from one another, the record holistically is bound to turn heads in the pop punk scene, pleasing long-time fans with the sound that the band has mastered by now and definitely picking up some new listeners along the way.

The band kicks off Eternal Boy with a short intro track titled “206 Fairview,” which, as the band revealed in an exclusive track-by-track, is actually the address of the house in which the band held their first rehearsals as The SpacePimps. The single verse that makes up this 50-second introduction sets the tone for the rest of the album as one that tells tales of the struggles and obstacles that make up a person’s life. But what stands out about The SpacePimps is that, despite whatever preconceived notions their band’s name left you with, they tackle issues in their songs that stretch far beyond the generic breakup songs and hometown hate expected from pop punk bands nowadays. “Tradition” discusses the importance of a person’s past in shaping who they become, but the first single off the record, “Brand New Me,” recognizes the people that you may have encountered that hold you back and the importance of letting them go in order to move forward.

“Amber Street” continues this theme of personal progression, touching on the struggles faced in recovery from bad times in a person’s life and the hope that comes with starting over. The band provides listeners with some insight into the behind the scenes drama of the music industry in “Say It To My Face” as they tell the story of another band that didn’t have very many nice things to say about The SpacePimps, to say the very least. “Katie” is a love song with an unusual approach, painting a picture of the ideal girl to be with that’s worth searching your whole life for, even though who she’ll really turn out to be remains unknown. “All Signs Point Home” even touches upon the fear of not knowing what happens after death, questioning the existence of an afterlife and where loved ones go after their passing.

The SpacePimps’ sound comes from some combination of Blink-182, The Starting Line, and All Time Low to create a style that’s nostalgic for longtime pop punk fans, but with a fresh twist that makes them unique. The single off the album “Party Foul” represents this combination perfectly and is upbeat, energetic, and guaranteed to be a fan favorite. “Fairweather Friend” and “Tears Falling” follow the single’s upbeat precedent but are more Blink-influenced than the rest of the album in their faster pace and more traditional punk edge. And make sure you don’t overlook bonus track “Thanks For Nothing” – the band shows off their lighter, more dancey side on this track, which features a melody that’s sure to be stuck in your head for hours. But apart from a few songs on the album, it was difficult to pinpoint musical aspects of most of them that made them stand out above the rest. They’re all packed with the contagious energy that The SpacePimps have provided since day one, laced with captivating riffs and particularly strong vocals, but they’re exactly what you would expect to hear from this band at this point in their career.

So if clean-cut, classic pop punk is what you look for in an album, then Eternal Boy is just what you’ve been searching for. But if you’re looking for a band that overreaches the boundaries set by their previous albums, then you might find yourself slightly disappointed as you approach the final notes of the end. That’s not to say The SpacePimps should be taken lightly – their lyrics are honest and down to earth, the message of their music is powerful beyond measure, and they without a doubt are a talented trio of musicians. But one can’t help but wonder what’s holding them back from reaching above and beyond the boundaries of what’s expected of The SpacePimps after so many years spent solidifying the sound they’ve claimed as their own.