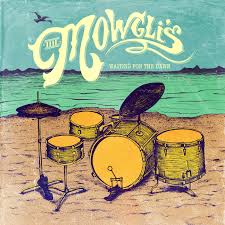 There’s a reason The Mowgli’s have been a necessary addition for so many notable summer music festivals this year (think Hangout, Bonnaroo, Lollapalooza, and the like). Their 13-track debut LP Waiting For The Dawn will clue you in – it’s stuffed full of folksy refrains, upbeat strumming, and tidings of goodwill. If it conjures up the imagery of, say, eight musicians gamboling about on a stage (shoes and socks optional!) then you’re simply picturing every live show the band performs. The band’s first full-length works to encapsulate their positive energy and easy camaraderie without losing any substance during the studio process.

You might have already heard “San Francisco” jamming from your car speakers (it made quite a splash on Alt Nation by reaching #1 back in April) or elsewhere in mainstream media. It’s the first track from the band’s autumn EP Love’s Not Dead and also comes first on Waiting For The Dawn, and it’s certainly a tempting lure to listen to the rest of the discography. Once the song’s chorus bursts open, it’s hook, line, and sinker on having at least a soft spot for The Mowgli’s. Other notable tracks carried over from the EP include “The Great Divide” (I listened to this as the sun rose over the Tennessee hills on a road trip to Bonnaroo a week ago and my heart swelled a few sizes a la the Grinch) and “Time” (reflective and honest while never lulling into pessimism).

As for new material, “Say It, Just Say It” propels the album from the band’s trademark simple concept of general love for humanity into feelings focused on a single person.   With fluffy lyrics like, “We were spilling wine on your best friend’s bed / When you said this was ridiculous / And you kissed me just because you knew it’d shut me up,” the song is sure to tickle something inside of you – perhaps the memory of an old crush or the thought of the person you just want to read your mind and kiss you already. The track stands back to back with “Leave It Up To Me,” another groovy tune complete with plenty of “whoa”’s, soaring synth, and group vocals. It’s upbeat even in the face of possible heartbreak, insightful but never too preachy, and thus very classic Mowgli’s.

The closing track “We Are Free” sobers the album up with its earnest, even somber tones that encourage you to slow down and savor the message. The band pays homage to their EP with chants of “Love’s not dead” and chilling call-and-response. Songs like “We Are Free” cement the fact that The Mowgli’s are more than just a musical group – they’re an encompassing idea as well as a set of views on the structure of society and its relation to the human condition.

Overall, Waiting For The Dawn can go one of two ways: shuffled in with your summer CD collection to be blasted while driving down the highway, or excavated for a vastly deeper meaning. The album is conscientious in its commentary, always offering nuggets of wisdom and fresh ways to revamp your worldview for the brighter. It’s an interesting function of pop-folk music, but this album demonstrates it keenly.