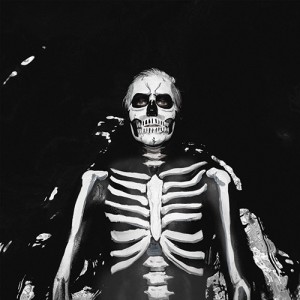 If someone had offered me a listen of Forever Halloween five years ago, I would have had a difficult time mentally bridging the gap between Can’t Stop, Won’t Stop and the band responsible for this album. Sure, John O’Callaghan’s distinct languid vocals and the band’s multi-guitar sound still harken back to their beginnings, but vocally, lyrically, and essentially, the band has used each album since then as a stepping stone to this newer, rawer sound. Forever Halloween requires a leap more so than merely a step from their back catalogue, even 2011’s Pioneer, and it rewards listeners with more inner complexity than anything they can cite from the band thus far.

Obviously the members of The Maine aren’t teenagers or even 21 anymore, so it’s natural they’ve progressed, right? Right. Except the direction they’ve taken the music – into raw lyrical honesty and harsh emotions conveyed through each pluck of the strings or crash of the keys – doesn’t naturally follow from their beginnings. Forever Halloween has the potential to leave listeners gutted after only the first play through with its loneliness and reflectiveness.

Anyone who has isolated themselves deep into the corners of their own mind will find O’Callaghan’s lyrics to be an eloquent and heartbreaking description of how it feels. “Here is my guide on how to stay alone / Just drink ’til you’re gone and pass out on the floor,” he sings, and even if the alcohol references don’t hit home, the feeling of laying your head down after a lonely day and trying to forget will. For those who’ve found growing up to be a maze full of dead ends, songs like “Fucked Up Kids” will speak volumes about non-conformity in navigating the process.  That’s not to say the entire album is full of angst (for instance, “Love & Drugs” manages to stay mostly upbeat despite the distinct artificial nature of its brand of happiness) but overwhelmingly, the album seems rooted in darkness. It’s this very quality that lends Forever Halloween its authenticity, though, so in some respects you can be happy it’s sad.

Although “Take What You Can Carry” opens the collection with wisdom set to a catchy percussive backbone and “Run” is satisfyingly reminiscent of some tracks on Pioneer, the album really takes off after the halfway point. “Birthday In Los Angeles” carves out an emotional valley in the album; the lyrics call out the gilded nature of the entertainment industry while the empty record-player noises in the background add a wistful, faraway sound that distinguishes it from the rest of the tracks. The juxtaposition between the intimate subject matter of a birthday party and the obvious falseness of Los Angeles as it’s portrayed in the song have the potential to hollow listeners’ insides out. Throw in some wistful slide guitar and echoing vocals and pretty soon you feel as if you’re viewing the underside of the American Dream (not to get too The Great Gatsby on you there, but alas). Soon after, “Kennedy Curse” casts a similar feeling but with the focal point of a failed relationship. O’Callaghan’s “I feel nothing at all” contrasts with powerful drums from Pat Kirch, Jared Monaco and Kennedy Brock’s wailing guitars, and Garrett Nickelsen’s steady bass work to make the listener feel plenty.

“These Four Words” introduces soulful piano into the mix, and also manages to gracefully cover the point of view of someone who ends a relationship. It’s easy to attribute failed love to circumstance or specific events, but it’s something else entirely when one party just doesn’t feel as they should. The lyrics cover all the conflicting emotions of admitting, “I don’t love you,” in a poignant ballad with a fresh take on breaking up. Immediately after, the title track closes the show on a fittingly melancholy note: “We’re all monsters / Living in a dream / So you be you and I’ll still be happy.” The production shines through on this track (huge musical props to Brendan Benson of The Raconteurs in this department) and it’s got a piercing guitar solo to boot.

Overall, Forever Halloween digs deep to unearth some serious human truths–and sounds appropriately mature doing so. The album boasts worldliness in comparison to The Maine’s earlier catalogue, and it’s evident from the authenticity of the collection how effectively the members have channeled their experience of growing up into their work.