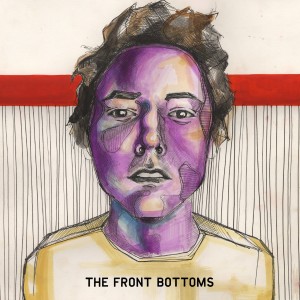 One part schizophrenia, two parts dance party, one part raw energy, and a dash of introspection may sound like a recipe for disaster, but it’s actually the recipe for one of the most unique and refreshing albums of the past year. The Front Bottoms’ self-titled debut full length is unlike anything that has ever been heard before — in the best way possible. It’s what happens when Mountain Goats-like vocals meet punk and pop influences in the form of a quirky duo and it is pure unintentional brilliance. Released on Bar/None Records, The Front Bottoms’ debut sets the stage for long and successful careers from Brian Sella and Mathew Uychich as there is nobody in the game doing it quite like they do.

The album opens with the instantly addictive “Flashlight.” With a few catchy guitar chords quickly transitioning into an explosion of horns, drums, and Sella’s piercingly unique vocals, the song is hard to take off of repeat. However, once you’re past it, you’ll find that the rest of the album is just as endearing. Follow-up track “Maps” is one of the more lyrically relatable tracks on the album, touching on being stuck in a relationship while wanting to experience what the rest of the world has to offer.

The remainder of the first half of the album comes with the same infectious energy but with lyrics that become progressively ambiguous. It seems as though each song tells at least five stories, or maybe not even one. This probably wouldn’t work coming from any other artist, but something about The Front Bottoms makes it more than okay. Despite not knowing what they’re singing about half the time, the other half they paint a perfect picture of the screwed up suburban world the album was inspired by.

The climax of the album is undoubtedly the halfway mark with “The Beers” and “Father.” Even if you haven’t gone so far as to take steroids to impress a suitor, reasoning, “You like a man with muscle and I like you,” anyone can relate to the feeling of forgetting who you are in order to fit into someone else’s world. Similarly, even if you haven’t dreamt of hitting your father with a baseball bat, you know what it’s like to use a relationship or a friendship as an escape from whatever trouble is happening in your life. Respectively, “The Beers” and “Father” provide hard-hitting subject matter that offsets the ambiguity of other lyrics on the record, paired with layers of sound that make it hard to believe this is a two-piece band.

While the first half of this album provides cowbells, claps, and danceable jams, the second half incorporates sampled voicemails and more introspective lyrics for unwinding and thinking. With more slowly-paced songs and a lot more left up to the imagination, the album ends with proof that The Front Bottoms can deliver the best of both worlds. Right up to the haunting final track, “Hooped Earrings,” each track provides something unique from all the others.

The Front Bottoms’ self-titled sets the bar extremely high for whatever they do next. Something about the natural feel of the album makes it easy to believe that sustaining their sound won’t be a problem. Whether you’re traditionally a fan of pop punk, folk, or ska, there is bound to be at least one thing that you’ll love about this release.