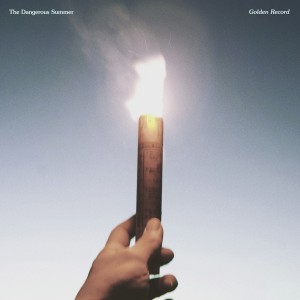 A lot has happened in the two years since the last time The Dangerous Summer released a record. After a myriad of tour cancellations, impulsive tweets, statements and retracted statements, everybody was left unsure what the future of the band would be. Amid the drama, the band also lost already on-and-off drummer Tyler Minsberg and lead guitarist Bryan Czap, replacing them with Ben Cato and Matt Kennedy (formerly of The Graduate) respectively. Knowing they had much to answer for with their next release, the band faces the speculation head-on with their ambitiously-titled Golden Record, inspired by the Voyager Golden Records that were launched into space with what was meant to be the most accurate depiction of life on Earth. Similarly, the band leaves it all on the floor with this album, culminating in the most powerful, honest representation of what The Dangerous Summer have become. With ten songs packed with heart and aggression, the band strays from the laidback pop of their previous albums in favor of a more heavy-yet-melodic sound to get the message across.

The record appropriately begins with an introduction to the band’s roots. “Catholic Girls” is a name-dropping hometown ode where singer AJ Perdomo nostalgically outlines the loves and losses of his past. There’s a noticeably grittier edge to his voice, which increases as the album continues. The new band members also immediately make their presence known. Kennedy goes for a rapid, vibrant strumming that constitutes the majority of the record while Cato’s diverse, yet highly technical, rhythms manage to complement the guitars and Perdomo’s inflections perfectly. “Sins” returns more to where War Paint left off, with Perdomo’s slow, steady vocals blanketing the driving instruments beneath him. From there, the band plunges into much darker material with “Drowning,” which starts with a sinister guitar riff augmented by the bass underneath. The song somewhat calls to mind Citizen’s Youth as Perdomo defiantly vents about escaping. “Knives” is one of the most aggressive and enjoyable tracks on the album. Every tortured, primal “you” that Perdomo unleashes during the chorus is impeccably balanced by symphonic background vocals.

From there, it almost feels like the record wakes up with “Honesty,” an upbeat track brimming with optimism. The chorus strongly resonates with the album art as Perdomo sings “We’ll tell the story of when / We wore our thoughts like a burning fire.” “We Will Wait in the Fog” is a standout track due to how its minimalistic keyboard riff manages to feel so comforting and reassuring alongside Perdomo’s heartfelt vocals. The closest thing to a ballad on the album, “Miles Apart,” brings us to the present in the form of a compelling love song as Perdomo asserts, “I’m finally happy / I’m finally new.” The theme of hard-earned triumph continues into “Anchor,” a fitting closer for an album of trials and tribulations resulting in victory. Ditching the grit stacked onto the rest of the record, this song is the most similar to the band’s debut album. Perdomo sounds smooth and confident as he emphatically repeats, “We did it.” It’s short and simple, yet a tremendous statement of success that the band has managed to pull together and even improve after all the problems that have plagued them during the last two years.

Some might say some of these songs sound too similar, or Perdomo’s new raw vocals can be a little overbearing, yet there’s a sense of urgency, even desperation at times, in the music that keeps you glued from beginning to end. The band has been caught in a constant, heavily publicized state of turmoil and nobody knew if they were ever coming back. Golden Record proves to be their redemption, however, after all the doubt encompassing them. Filled with emotions like angst, longing, and joy, this album ultimately provides an authentic characterization of not just The Dangerous Summer, but humanity as a whole.