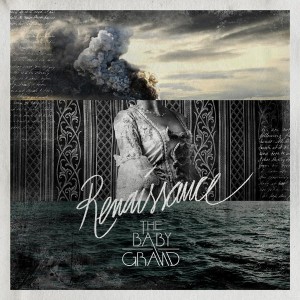 Hailing from Washington DC, young indie rockers The Baby Grand are set to fill a void in the scene. Their latest release, Renaissance, offers a refreshing dose of lighthearted energy with its clean vocals and warm guitar melodies. Written entirely by frontman Miguel Tenicela, Renaissance has the same ambitious and charming sound that our favorite leading men of the early 2000’s were notorious for. Fans of artists like Jack’s Mannequin and Dashboard Confessional will find themselves equal parts ecstatic and nostalgic upon listening to The Baby Grand’s blend of pop rock — a sound that isn’t quite as familiar as it once was. Originally a solo act, Tenicela has enlisted bandmates Aziz Dourrachad (guitar), Elliott Dean (bass), and Tyler Butts (drums) to compliment his vision, making Renaissance a well-rounded release that is sure to catapult the career of The Baby Grand to new heights.

Renaissance opens with a soft and short intro as its title track, smoothly transitioning into the appropriately-titled follow up song “Peace and Grace.“ This track about the quest to find comfort within yourself combines liberating vocals with a progressive buildup of energy for a sound that is refreshing and sincere. In just two songs, it becomes obvious that The Baby Grand are stacked with the talent to write and perform seemingly effortlessly. This musicality carries the remainder of the album; each track that follows is consistent in overall vibe but varies enough to provide its own unique experience. “Meet Me In Warsaw” is as relaxing as “Come Home” is uplifting.

The Baby Grand follow a pattern of simple, repetitive choruses, divided by introspective and thoughtful verses. This balance makes for songs that are as suited for self-reflection as they are for singalongs. The fourth track, “Mute Me,” grapples with relationship issues with lyrics like “The road between my head and my heart is one that I can’t seem to figure out” but offers a sense of hope in its repetitive refrain of “No, we won’t stop / Yeah, we’re not gonna stop,” a prime example of the relatable simplicity that is strewn throughout Renaissance. The album’s only shortcoming is that the overly simple lyrics take away from its clever lines, making them seem out of place.

Though currently unsigned, The Baby Grand are sure to continue to receive the positive attention they’ve gotten used to opening for acts like Good Old War and The Rocket Summer. The release of Renaissance confirms early in their career that they are full of talent and massive potential. The Baby Grand are just what the pop rock scene has been looking for.