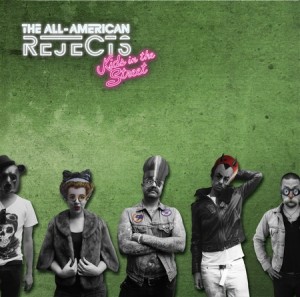 It has been over three years since the release of The All-American Rejects’ less-than-stellar third album  When The World Comes Down, and they’ve finally offered fans a sign of redemption. An outstanding blend of traditional Rejects alternative style with a touch of experimental flair, Kids in the Street is bound to be a hit among new and old fans alike.

This record sounds like the Rejects were in the middle of an identity crisis — they were testing new waters but still trying to maintain fans’ interest , and they produced this unexpected yet satisfying 11-song compilation of sheer quality music for fans of any genre. The band clearly wanted to stick to their alternative rock roots, and that is most evident in the album’s opening track “Somebody’s Gone.” However, they do show more of their pop influence in songs like “Kids in the Street,” “Gonzo,” and “Heartbeat Slowing Down.” These songs all have a slight techno feel that resembles Breathe Carolina’s style, minus the auto-tuned vocals and screams.

“Walk Over Me” is easily the best song on the record, as it is the best display of AAR’s traditional style. The song uniquely combines a perfect balance of provocative vocals and instrumentals bursting with the energy that resonates throughout the entire album, coming together to make the song an immediate favorite. “Affection” is another standout in need of instant attention, as the song opens with slower, simpler instrumentals and Tyson Ritter’s softer vocals. It has that “sappy sad love song” vibe bound to steal listeners’ hearts, and the song’s climax leaves the listener longing with Ritter for the affection he craves.

Ideally, the record would have ended there, and there would have been no complaints. However, the closing track “I For You” was less than impressive. A simple assemblage of acoustic guitar and vocals, the song comes off as very clichÃ©. “Affection” was much more notable lyrically, vocally, and musically, and would have closed the record with more of a bang.

Despite its occasional weak moments, Kids in the Street is ultimately a must-have for Rejects fans both old and new. Older fans will appreciate the fact that the boys they first fell for haven’t abandoned their traditional sound and the fact that this album is a significant improvement on their last release. The band take some attention-grabbing risks yet still stick to their roots, allowing them to reach out to as many listeners as possible, old and new, without “selling out.” After three years of reflection on their rocky third album, they needed to return with a phenomenal follow-up, and that’s exactly what Kids in the Street is.