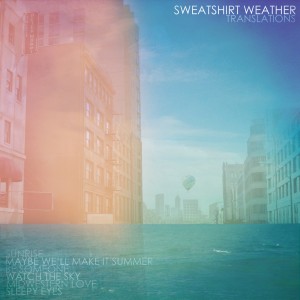 Sweatshirt Weather are going back to the basics with the recent release of their six-song acoustic EP Translations. The EP was completely self-produced and released, mastered by guitarist/keyboardist Daniel Inskeep. Composed of three songs from their past EP’s, two new tracks, and a cover of Something Corporate’s “Watch the Sky,” Translations is a calculated combination of regression and advancement. Bassist Chad Kulaga’s intricate acoustic guitar work and soft melodies matched with Chris Stewart’s raw vocals make a strong foundation for a potentially even better future release.

By revisiting previously released tracks “Maybe We’ll Make It Summer,” “Be Someone,” and “Midwestern Love” on Translations, Sweatshirt Weather put a delicate acoustic twist on some of their best works. Stewart’s vocals come across as strained at times but are stronger and more effortless on the band’s brand new songs, which strategically bookend the EP.

Possibly the best track on Translations is opening song “Sunrise,” whose clearly-defined initial notes set the intimate tone for the rest of the EP. The song is memorable not only for Kulaga’s part on the acoustic guitar but also for Stewart’s appealing chorus, clearly reminiscent of summer: “Baby let’s go back to that season/ Tell me we’ll go back to the way things were.”

Sandwiched in the middle is an acoustic cover of Something Corporate’s “Watch the Sky,” which fits seamlessly with the rest of Sweatshirt Weather’s original songs. Acoustic guitar and piano combine with Stewart’s seemingly effortless vocals, making it a good choice for an additional track.

Finally, the album closes with “Sleepy Eyes,” a softer and simpler song that ends the EP on a lighter note. The track features an acoustic solo that completely changes the tone in the middle and ends with the chorus chanted along to claps and the guitar heard faintly in the background until the final moments of the song.

Translations is the lighter-sounding but more serious version of Sweatshirt Weather, which could redefine their sound in the future. This EP proves that the band does not need a big sound to make a big impact and that revisiting the past is not always a step backward.