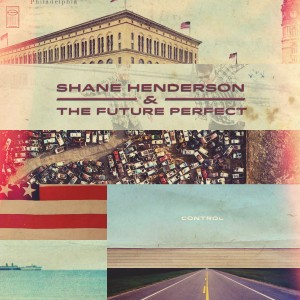 At the end of 2011, Valencia announced their hiatus much to the dismay of diehard fans across the country. Since then they have spread out amongst their own respective projects, including vocalist Shane Henderson, who has released his first EP under his new moniker, Shane Henderson and the Future Perfect. Henderson utilizes the greater creative control he has on the aptly-named Control to explore his musical capabilities, replacing the punk in Valencia’s pop punk with singer-songwriter as he moves toward a lighter, more laid-back feel.

Relying on mostly just an acoustic guitar and drums, Shane Henderson ensures that his vocals are always at the forefront this time around. Opener “Wasting Time” serves as an effective sample of his new sound. It starts off with just an acoustic guitar with elements of folk and rockabilly mixed in before the chorus kicks in with tinges of Henderson’s pop punk roots while still managing to show off a gentler side to his vocals. It’s nice to know he hasn’t lost any of the passion he always pours into the microphone as well. “I Can Feel a Change” will probably appeal the most to Valencia fans. It contains inspirational lyrics and bright riffs reminiscent of We All Need a Reason to Believe, along with pounding drums courtesy of Will Noon (fun., Straylight Run).

Halfway through the EP, the band slows it down with “Can We Get Away,” a calm acoustic porch jam. Sweet and soft, the track sounds a bit like A Rocket To The Moon’s newer material with Henderson’s vocals calling to mind elements of Jesse Lacey’s brooding croon. Closing out the album is “Control,” which is probably the best song on the EP. A complex, dimensional pop rock song, it contains a greater sonic balance between all the instruments and an extremely infectious hook. Clocking in just over five minutes, it’s obvious the band is leaving everything they have on this last song. It works though, as the track will continue to ring in your head until you’re forced to go right back to the top and listen again.

There’s no question that Control will undergo constant comparisons to Valencia. While the two acts do have undeniable similarities including the same passion and energy, Shane Henderson and the Future Perfect embody more pop and rock sensibilities, rather than in-your-face pop punk. On “Control,” Henderson sings, “I think a new start is what I need,” and this project gives him the freedom to pursue whatever his musical inclinations lean towards. This EP is sure to appeal to both previous Valencia fans as well as those who prefer a more natural, organic sound.