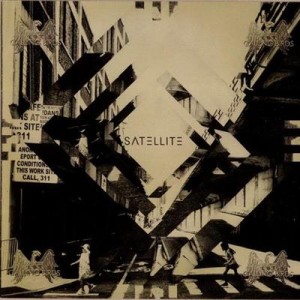 Somewhat fittingly, Satellite consists of four previously individual artists who came together to form the alternative rock quartet and release their 11-track debut Calling Birds. Although Steven McMorran, Mitch Allan, Josh Dunahoo, and Erik Kertes have each been previously involved in the industry, the chemistry that seems to pervade Satellite held them together, and, as frontman Steven McMorran penned on the band’s website, “We truly hope SATELLITE becomes a voice for the joy, heartache, beauty and truth of life.”

That being said, even from the first listen of Calling Birds, the emotion and the intensity of the music shows itself to be very evident. From the opening strains of “Say The Words,” the listener may feel like they are standing in a rainstorm as thunder crashes around them and they look up at the sky and ask, “Why?” in typical movie fashion. Not that the music is particularly morose, but it packs a sort of melancholy, questioning punch that makes it feel epic enough to blast as background music at a turning point scene in one’s life. Remember this feeling, as it will recur frequently and powerfully throughout the album.

“Brooklyn” demonstrates more twang and distinct rhythm and feels a bit more Americana than its predecessor. The methodical jaunt of the rhythm nearly masks the lyrical contributions: “I feel that you’re waiting/ while you lie awake / for an answer that’s not coming.” Ah, so perhaps asking “why?” earlier was fruitless, but nonetheless all this questioning paints the album in deeper shades of plaintive, as if the speaker is searching for solace in answers.

“Turning On My Own” and “Saving Us Tonight” both evoke a similar feeling with crescendos building from gentle to our aforementioned “epic rain movie scene,” but “Silhouette” offers a respite in the form of an acoustic lull. The song lends spotlight to McMorran’s vocals, and stays docile until the very end, when – you guessed it – the song elevates back into the stratosphere of overly emotional, as it’s almost jarring in its lament.

“Ring The Bells” exudes wisdom within its calming, caressing tune. It’s the namesake of the band’s previously released EP, and it sheens with the polish of introspection, finally offering some answers about the nature of truth, love, and friendship. The formulaic power buildup returns for “God Save The Dream,” but it manages to recede several times so the song laps like waves. With each chorus, the power is definitely there, but the juxtaposition between the song’s gentle segments makes it a tad more distinctive than some of the others with their similar methodical builds.

The piano swells in “You & Me” make it the most balladic tune on the LP, particularly in synergy with the extremely forlorn vocals and strategic pauses. Besides the lack of a real heavy accent, the twangs and the melody make this song sound like a country song playing out of some dusty jukebox in a Southern bar at about 4pm on a Monday; it tugs the heartstrings and possibly may remind the listener of their own misadventures of the heart. If the band is indeed going for “heartache, beauty, and truth,” I’d say this song hits the hardest and most deeply in that area. The ending refrains of “Hallelujah” in finale “Till I Return” seem to chase away most of the clouds and rain, so the album ends with its movie moment concluded and a hopeful note resonating through the work.

Overall, many of the songs on Calling Birds start to sound extremely similar in structure, tempo, and overall feeling, but the gems that break this trend reawaken the listener to the emotional value of the album at strategic points along the way. If a listener ever found himself or herself in need of an album to narrate their life story at the point where they’re staring up at the sky asking the big questions of life, this may be the one. It has no short supply of emotional rawness, it’s constantly reflective, and it crosses genre boundaries to offer the sorrow of Americana and country with the solidity of alternative rock.