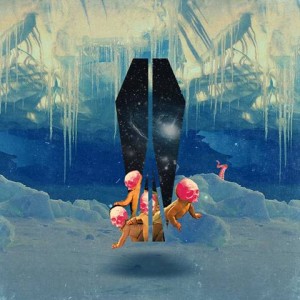 Heavy. Loud. Weird. These three adjectives perfectly describe the debut self-titled EP by Peace’d Out. The band is somewhat of a “supergroup,” made up of Vinnie Caruana (I Am The Avalanche, The Movielife), Steve Choi (RX Bandits), Casey Deitz (The Velvet Teen) and Roger Camero (No Motiv). The members take elements from each of their respective bands and put a collective spin on things, creating a sound all their own.

The band started out as a mystery and their songs are a bit mysterious too, each having a little surprise or something special in them. The EP starts out with “Castlemania,” building from noise into an onslaught of guitars. Throughout the songs, Caruana pushes his voice to new levels, sounding grittier and stronger than ever before. “White Pyramid” serves as the most experimental track on the EP as it switches from mellow to frantic with some video game-esque noises tied in.  “Cha-Chang-Changmail” tells a story, while “I Would Like to. Feed Your Fingertips. To the Wolverines” gets a little more personal, the latter referring to self-struggle with lines like “With the past in the bag and the bag’s in the river / I just needed some time to think.” Closer “Baadering Raam” takes on a slightly more straightforward sound and ends the EP in abrupt manner as Caruana repeats “Boycott the sun.”

Clocking in at just over eleven minutes, Peace’d Out may seem short but proves to be the perfect length to get familiar with the band. The songs get ingrained into your brain after the first listen, making you want to keep hitting the repeat button, and each time you’ll find an element you didn’t notice before. At a time when many bands would rather stick to trends than take a risk, Peace’d Out shine as something fresh that hopefully won’t be another one-and-done side project.