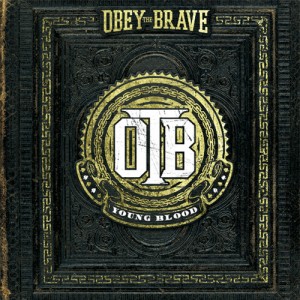 With a take-no-prisoners sound, Obey The Brave have unleashed their debut album Young Blood. The album has a solid level of energy throughout every song and won’t let listeners sit down for a minute. Every member puts their all into this album and you can hear it from the vocals to the drums. Young Blood will enthrall its listeners with its sheer passion.

“Lifestyle,” the first song on the album, eases listeners into the Young Blood sound. Starting slow, it works its way into the heavy chugging guitar riffs and double kick heard all over the album. Full of pent up aggression, “It Starts Today,” “Get Real,” and “Unstoppable” all have a weight to them. “It Starts Today” and “Get Real” both have beginnings that don’t let you catch your breath — from one song to the next, you won’t be able to think. “Live and Learn” and “Early Graves” have drummer Stevie Morotti laying down precise and well-planned beats, artistically adding to each song and managing to get his own time in the spotlight. Every band member finds their own niche on this record.

The band brings out all their talents for this album. Vocalist Alex Erian uses his French in “Garde la Tete Froide,” which somehow melds class and metal together. If French kings threw down, it would be to this song. “Grim,” a 30-second electronic song, provides an intermission in the otherwise full-speed album. The song “Burning Bridges” is a diamond in the rough. If you’ve ever wondered what Obey the Brave would sound like if they included clean vocals more, prepare to fall in love. On top of the incredible vocals, both clean and screaming, guitarists John Campbell and Greg Wood play over-the-top guitar lines, carrying this energy into “Self Made” and “Time for a Change” as well. “Self Made” has enough intensity to keep you pumped on its own, but combined with the rest of the album, it’s unstoppable. The amount of ferocity that the songs on Young Blood include will have even jaded music listeners clamoring to listen.

Listeners will play this album over and over again for all the right reasons. It’s an album to get lost in — you won’t even notice half an hour has passed since you pressed play on the first song. Audiences won’t have a problem taking a liking to Young Blood, and it definitely isn’t a guilty pleasure album; you’ll have no trouble admitting you have it on repeat.