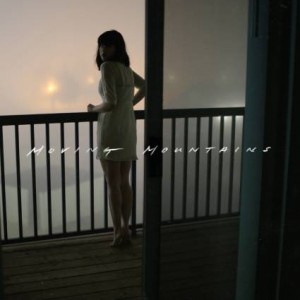 Moving Mountains is a band that cherishes their autonomy. There are no set standards and certainly no expectation to up the ante after each release. Gregory Dunn (vocals, guitar) told AmpKicker, “All our records definitely sound different, and don’t necessarily follow a progression or process from one another. It’s really whatever we’re feeling at the time.”

The band’s highly anticipated self-titled release is a pleasant follow-up to 2011’s Waves. Musically, it is a beautiful compromise of melodic indie and post-rock. Sure, it’s missing the sporadic, heavy moments of Waves, but the intensities and dynamics are still prevalent and cathartic. Fans, new and old, should respect this album without contrasting it to other releases. There is something for everyone on this record.

“Swing Set” sets the tone and mood of Moving Mountains. Opening with a signature noise pad, spacious drums play solo – akin to Jimmy Eat World’s Clarity intro track “Table for Glasses.” Grooving electric and acoustic guitar strums fill the song in as bell-like textures carry you into a whirl of beautiful sound. You can immediately notice a new vocal delivery from Dunn. His vocals are very intimate and breathy, suiting the other instrumentals perfectly and giving the record an emotive, personal feel.

“Burn Pile” punches you in the face with twinkly guitars, choral bells, and airy harmonies, while “Hands” sweeps the listener away with its subtle but intricate approach. It’s practically a folk song masked in ambient post-rock textures. “Seasonal” opens with a crafty riff that carries into a fast-paced melodic-indie tune. There is a slow instrumental jazzy groove and an unsuspecting guitar solo that follows. It ends with tremolo picking, crashing drums, and washy noise.

“Eastern Leaves” is the best representation of the album as a whole. It opens with a low, intimate vocal over finger-plucked guitar. Glockenspiel carries the tune into a full-band groove. The highlight of this song is the reprise of Waves‘ “The Cascade.” Fans of the 2011 album will smile and naturally sing along. The song ends with a catchy vocal hook that could easily be in a Goo Goo Dolls song. All sides of Moving Mountains are exposed on this track, showcasing the band’s incredible versatility and creativity.

“Hudson” will please the veterans with its active, upbeat instrumentals and dynamics. It brings the album to a new height while “Under A Falling Sky” acts as a delicate interlude. “Chords” is a melodic indie-pop song that will leave you singing the refrain of “Is it in the chords?” incessantly. The album resolves with “Apsides.” It is not particularly distinct but ties the record together and makes it feel cohesive and complete.

Moving Mountains is a band that constantly refurbishes their sound. Their versatility and musicianship allow them to experiment with new techniques and approaches to their sound. They are certainly in their comfort zone with this release; only time will tell how their sound will evolve, digress, or completely change in the future.