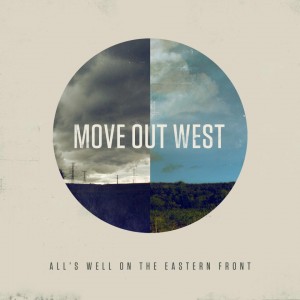 Move Out West is a band that has never been easy to label. A constant presence in the Connecticut music scene, the band has formulated an entirely unique sound which combines old-school rock ‘n roll with more contemporary pop rock. Their individuality on top of their outstanding live performances have made the band a local favorite and their most recent release All’s Well On The Eastern Front one of the most anticipated records in the state. The EP definitely shows growth in the band, from lineup adjustments to a change in their sound, but also shows some hesitation in their willingness to take risks.

“Magic Eight Ball” gets the EP off to a solid start, showing off vocalist Eben Wares’ incredible range with a raspy edge that’s certainly a pleasant surprise for recurring listeners. Lead guitarist Luke Wright owns every note, from the opening riffs to his crazy guitar solo in the middle of the song, delivering a clean, professional sound that you’ll be humming for days. First single “God Damn” continues the positive vibes set by its predecessor with its emphasis on the band’s newfound harder rock ‘n roll sound.

The subsequent pair of tracks are slower and more mellow, composed of heartfelt lyrics alongside captivatingly melodic acoustic guitar. However, the pair of acoustic tracks leave something missing — they leave listeners waiting for the great climactic moment in the songs and ultimately dissatisfied. Despite the tracks’ impressive musical compositions, Wares doesn’t give himself the opportunity to shine in his vocal performance as much as old fans know he can, leaving listeners wishing for more.

Luckily, “Without a Parachute” picks the pace back up to close the EP and shows off the higher-pitched vocal range that Wares is known for in classic Move Out West tracks. It mirrors a similar style to some of the band’s older songs, showing that their roots haven’t changed even though their lineup has, without complete disregard for their new and improved sound. This song, along with “Magic Eight Ball” and “God Damn” are must-haves for music lovers of all genres because let’s be honest, everyone could use some solid rock ‘n roll in their music library. These songs in particular demonstrate that the band’s new sound shows infinite potential for this band with a raw edge that their older material slightly lacked.