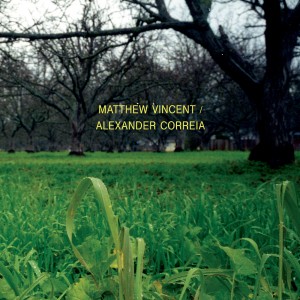 In a modern era where basically anyone can record their own music and release it via the Internet, splits have become the ideal release for lesser known artists. People enjoy splits as an opportunity to discover new music, and combining two artists’ fanbases helps each of them promote their music to a much wider audience than they could have accomplished alone. Matt Vincent of The American Scene and Alex Correia of The Tower and The Fool, two bands with devoted but small fanbases, have taken advantage of this strategic format to release their own solo music together. The result is a six-track portrait of loss and despondency delivered through bare instrumentals and poignant vocals.

Vincent kicks off the split with “Wicked Thirst,” using just a guitar, his voice, and a bit of reverb to express the pain of heartbreak combined with hangovers. The guitar follows a simple yet enjoyable riff, providing the base for Vincent’s voice, which is softer and smoother than with The American Scene, somehow finding space to fit even more emotion into his tone. In case the melancholic message was not obvious enough, Vincent continues with a cover of “Sad Eyes” by British singer-songwriter Bat for Lashes. He replaces the original piano part with a guitar mixed so minimally you can hear the streaks of his fingers against the strings, which add to the raw, honest aesthetic of the split. Augmented with strings as well, this is about as complex as the instrumentation on his side of the record gets – yet the music’s simplicity is what makes it so powerful. Vincent’s final song “Muslin” sounds so heartfelt and intimate, like he just went into the booth without preparation and poured out all his feelings.

Alex Correia picks up right where Vincent left off with “I Run with the Haunted,” which is appropriately titled for how haunting the track feels with his vocals floating over the guitar. Considerably toned down compared to his full band efforts, it feels like Correia is whispering into your ear. The rapid high notes played over the mid-tempo riffs on the guitar also contribute to the track’s impression of airiness. “Let it Ride” strongly resembles Brighten due to Correia’s gentle crooning and the vivid guitar strumming, along with lyrics that would make The Wonder Years proud as Correia sings “It’s not falling apart / It’s falling into place.” Sadly, after five compelling tracks, the split ends with its weakest song, “Corinna.” The opening country riff feels too aggressive and out of place compared with the rest of the split. Correia adopts an ethereal tone to his voice which easily becomes overpowered by the guitars, especially when a surf-influenced melody is added on top. The overbearing instrumentation is unfortunate because the lyrics are the best part of the song as Correia successfully sums up the entire album with “Love is giving everything / It’s giving it all away without expecting anything.”

This split does not constitute the launch of two full-on solo careers, but rather serves as an opportunity for two frontmen to strip their musicianship to its bare bones and display their talent in its purest form. Despite some minor mishaps, both Matt Vincent and Alex Correia hold their own with their earnest, genuine delivery of emotionally riveting music. After listening through this album, the first thing you will want to do if you see them is give them a hug.