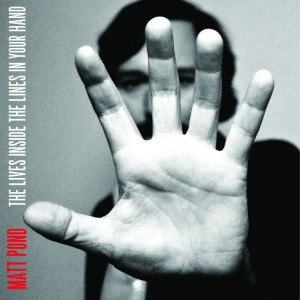 Matt Pond’s first official solo release The Lives Inside The Lines In Your Hands brings a lighthearted and soft-rock/alternative feel to the generally optimistic lyrics. The album is good overall, but the listener is left feeling unsatisfied with overly simple melodies and lackluster lyrics.

“Let Me Live” opens the album with a soft rock feeling, featuring a simple melody composed of upbeat piano and guitar. The song is a catchy first track, but the lyrics and common sound are less than striking. Lead single “Love to Get Used” piques the listener’s interest with clear guitar and strong drums in the opening, then leads directly into a verse that builds with each passing line. The chorus is remarkably memorable, and the feminine harmonies accompanying Pond add to the depth of the track, even if it ends a little abruptly.

Pond takes a slightly more serious side with “Starlet,” which begins with light lullaby-like piano and moves into a bass driven verse and chorus. He sings, “I know / There’s so much I don’t know / I still know someday I will make sense to someone,” providing at least a little hope for the lyrics of the album. The mood picks up again during “When The Moon Brings the Silver” with acoustic guitar and pizzicato strings. The harmonies are subtle on the verses, but come out clearly and prominently during the chorus. Here Pond’s lyrics are thoughtful as he sings, “Down in the dirt there are worlds upon worlds / where we gasp at the glimmers / crashing down onto your side,” giving an almost ethereal feeling to the track.

“Go Where The Leaves Go” and “Bring Back the Orchestra” come up next, but are the weaker tracks of the album. Being right in the middle of the album, it is too easy to skip over these slightly boring songs. However, a high-tempo drum picks up the beat of “Hole in My Heart” immediately, offsetting the previous two songs. The track gains depth with strings setting the background for Pond’s vocals, and a few subtle notes of an electric guitar sounding during the climactic parts of the song. Pond’s lyrics are a little more heartfelt regarding heartbreak on this track, but the comfortable rhythm helps the track maintain an air of nostalgia.

“Human Beings” returns to the slower pace of the album’s middle, with soft opening
vocals and repetitive chorus, “In your wildest dreams/In the depth of evening/You
have to believe/In human beings.” The song idea has potential, but the message is
missed and ends up being a more disappointing song on Lives. The title track comes second to last on the album, starting careful and slow but quickly picking up pace again. Pond finally completes his thoughts lyrically, presents them clearly in thought provoking lines, “Just because we’re in these bodies/Doesn’t mean there isn’t more,” and “There’s a world inside your palm I’ll never leave.” Closing track Strafford” begins with rhythmic acoustic guitar, minimal percussion, and light vocals. Pond is backed by airy harmonies once again, making the song an effortless listen and a nice, carefree end to the album.

Overall, the album feels insubstantial. It has a few good and catchy tracks, but it is
mostly a light listen. Musically, the album features smooth instrumentals and simple
chords, but the vocals are generic and the lyrics are lacking. The album is definitely
enjoyable as background music and casual listening, but will doubtfully make the
top of anyone’s list.