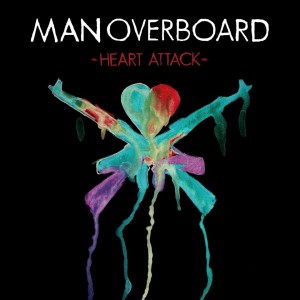 “Pop punk” is probably one of the most controversial classifications of music out there these days. The bands that fans call pop punk are almost always criticized for being too much pop and not enough punk, or too much punk and not enough pop. Few genres are criticized nearly as much over their sheer definitions, but Man Overboard courageously took the genre by storm when their “Defend Pop Punk” movement infiltrated the scene back in 2010. Now, if you’re going to base your band’s image around the defense of a genre, you should probably be setting some kind of standard as to what that genre is supposed to sound like, right? Well, not exactly. The range present in Man Overboard’s third full-length Heart Attack epitomizes the fluidity of the term “pop punk,” and the band show both fans and critics that it’s not an artist’s angst or heaviness that makes them a part of that scene, but the presence of that “love your friends, die laughing” mentality that this group has always embodied through their music. That being said, Man Overboard are back again with yet another album that’s bound to leave a lasting impression on the scene.

Singles “Where I Left You” and “White Lies” served as the perfect teasers for the album, carrying a style over that reflects the band’s remarkable self-titled album. Tracks like “S.A.D” and “Re Run” continue this reminiscence and are bound to be favorites among long-time fans, showing off the band’s traditional energetic, down-to-earth style that’s become so familiar to their supporters. “Open Season” was the best by far of the three singles released prior to the album, though, featuring Thursday’s lead vocalist Geoff Rickly. His vocals are spot-on and compliment Nik Bruzzese and Zac Eisenstein’s perfectly to make for one of the best tracks on the record.

But despite the fact that some of the first songs fans heard off the record were arguably the greatest, the rest of the album is nowhere near disappointing. Tracks like “Secret Pain,” “Boy Without Batteries,” and “How To Hide Your Feelings” are definitely written to be blasted at full-volume through car speakers with the windows rolled down as you sing along at the top of your lungs. They show off the lighter side of pop-punk, as Man Overboard knowingly do best. But the band push their limits, too, especially in “Hoodie Song,” where they show off a heavier edge than listeners have seen thus far on the album, exemplifying the flexibility of the genre they have claimed as their own and the versatility of the group altogether. “Wide Awake” adds to the variety in this album, closing the record with an acoustic ballad, and although ending on a slower song is a little clichÃ©, this song is delivered with enough passion to raise goose bumps from head to toe, and definitely not one to be overlooked by any means.

It’s also important to note that this is the first album that drummer Joe Talarico has recorded drums on in full, and he put forth an unforgettable display from start to finish. Since the band generally have a more pop-oriented interpretation of the sound that most pop-punk bands hold, it’s oftentimes the drums on a track that give it the means necessary to carry the passion of their lyrics over to their music. Although it can be heard throughout the entirety of the album, the title track of the record and “Suppy” demonstrate this drum-driven edge most distinctly.

With Talarico’s recording debut fulfilled, Warped Tour coming up, and all of this fantastic new music available, Man Overboard fans should be eager for what this band has coming. This album illustrates their abilities as a group of musicians and is definitely a step toward greatness if they continue to take risks and outreach the confines of stereotypical pop-punk. It’s a must-have for anyone that considers themselves a fan of the genre — whether you like dancey powerpop or angry, angsty rage, there’s unquestionably something for everyone on Heart Attack.