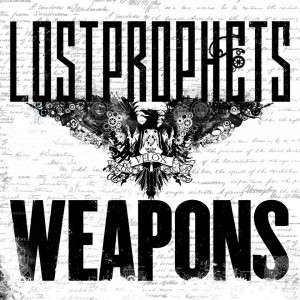 Lostprophets have picked up the pieces after the struggles that surrounded their last album The Betrayed. Through lineup changes and record label pressures emerges Weapons, the band’s fifth studio album and some of their strongest material to date. Released in the UK earlier this year, Weapons is finally available for audiences everywhere to fall in love with.

Lostprophets have put together an album that isn’t just edgy — it’s cutting-edge. “Bring ‘Em Down” takes the offensive from the start with its in-your-face hooks and forceful guitar riffs. Jamie Oliver, the band’s resident electronic mastermind, packs the album with toe-tapping synth lines and always know when it’s his time to step in. “Another Shot” and “Can’t Get Enough” are where he truly shines, with the keyboard on “Can’t Get Enough” accentuating the track’s haunting allure. Drummer Luke Johnson proves he is an admirable addition to the lineup, bringing more depth to their songs and providing a solid framework for every track on the album.

If you’re looking to bounce around, “We Bring An Arsenal” and “Jesus Walks” (not a Kanye West cover, disappointingly enough) have just what you need. These tracks bring a fist-pumping liveliness to the album in true Lostprophets form. Vocalist Ian Watkins puts together a variety of styles on “Better Off Dead,” combining spoken word-influenced vocals with his usual pop style of singing. His vocals also steal the show on “A Song For Where I’m From,” “A Little Reminder That I’ll Never Forget” and “Heart On Loan.” “Somedays” is the album’s most diverse track — with its acoustic guitars and delicate piano, it’s a rainy day song you’ll find yourself staring out the window to. Weapons combines a variety of genres to create a unique sound sure to catch listeners’ attention no matter what their mood.

Longtime Lostprophets fans won’t be disappointed by this album — it takes the best elements of the rest of their discography and combines them into one. If attitude had a sound, it would be Lostprophets. Drawing influences from metal, punk, pop, and rock, there’s something on this album for everyone. It’s almost illegal how much talent they have packed into this album, but luckily for Lostprophets’ listeners, there’s no law against owning these Weapons.