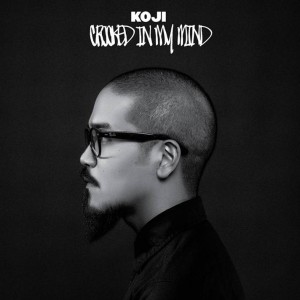 Koji’s first full-length release delves deep into the artist’s mind to explore the everlasting journey toward solace and acceptance. Crooked In My Mind aptly hints at the album’s dark, pervasive themes wrapped up in string melodies and the rawness of Andrew Koji Shiraki’s vocals. As a collection of art, it is supremely relatable by serving as a case study of the universal human experience. Throughout the duration of nine tracks, Koji explores how the individual connects or disconnects with the external environment in their actions and thought processes.

On one hand, it’s cerebral in requiring several listens to uncover the full trajectory of the journey. On the other, the full emotional range of the album softens the experience and will make it it easy for listeners to let the subtle sentimentality carry them through.

No other song on the album could set the stage as wholly as “Chasing A Ghost.” A nostalgic glance backward at the past allows Koji to wax sentimental (“It was a beautiful time in my life”) while the violin solo swells into an elevated finale. Before the powerful finish, the song peaks and recedes in strategic places to foster perpetual movement.

In stark contrast, “The Near And Far” maintains a distinct rhythmic steadiness. Listeners will not find any lilt in its matter-of-fact, bass-driven linear motion coupled with declarative lyrics. A few moments later, “Distance/Divide” uses bass drastically differently to propel the tune’s jazzy ebb and flow. The song features Ron Gilmore (keyboardist for Lauryn Hill) and Colin Gorman (Gypsy) on electric guitar, and the fullness of sound is apparent. The keyboards provide simmering undertones while the electric guitar solo bursts out in a gentle soul explosion.

As powerfully as the album began, so it ends. Penultimate track “Pang And Flash” features haunting cyclical chanting and a direct confrontation of demons: “Pain and exhaustion from a pace we can’t keep / The earth shakes and stutters, shut it off or start listening.” The opening line of “Pang And Flash” lent the phrase Crooked In My Mind to the album, and it stands out on the album as one of the most tortured, introspective tracks in the collection. No energy is lost in the transition to “What You Leave Behind.” It’s markedly more hopeful than the preceding songs and casts a faintly positive air over the album with its strumming acoustic simplicity and intricate cymbal accents.

Crooked In My Mind is only human – it lives within the contradictions of our world and sheds light in dark crevices of the human mind. It’s raw, it’s relatable, and it never shies away from introspection. Its varied instrumentation of keys, violins, acoustic and electric guitars, different bass styles, and tasteful percussion means the music itself narrates just as much of the journey as the lyrics do. Crooked In My Mind  represents a graceful pairing of musicality and message to leave a lasting impact on listeners, and perhaps inspire some introspection of their own.