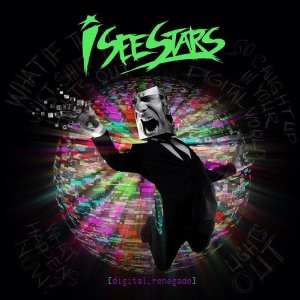 As a listener, if you’re expecting the same thing on I See Stars’ new album, Digital Renegade, as you heard on The End Of The World Party, you have another thing coming. It’s always exciting to see a band evolve from one album to the next, and that evolution is evident on I See Stars’ latest release. The electronic style they dabbled with previously is front and center on Digital Renegade, and while the album is noticeably heavier than both The End Of The World Party and 3D, they find a mix of electronica and metalcore that works well for them.

I See Stars do a brilliant job selecting singles: both “Nzt48” and “Filth Friends Unite” stand out and showcase what the band is all about. ISS offer a clever nod to pop culture with “Nzt48” while showcasing the dance music style they have adopted for Digital Renegade; if you get the reference to Limitless then the song will be even more enjoyable. Don’t let the beginning of “Gnars Attacks” trick you — despite the slow build, it’s worth listening to, and shows just how far the band’s music has progressed on this album. The electronic influences are highlighted in the first couple of songs, which is a change from their previous records. Dual vocalists Devin Oliver and Zach Johnson’s development and range show enormous improvement, making these songs much more dynamic.

“Endless Sky” features Asking Alexandria singer Danny Worsnop, who pumps up the song’s energy and shows other bands just how a guest appearance should be used. Cassadee Pope from Hey Monday brings that same spirit to “Electric Forest.” While those songs shine on the album, the “Mystery Wall” the album hits comes out of nowhere. “Summer Died In Connersville,” ”Underneath Every Smile,” and the iffy “iBelieve” is where Digital Renegade loses some of its momentum, as these songs fail to measure up to the rest of the record. “iBelieve” is a slow electronica song in a sea of metalcore, and it sinks more than it floats. The songs I See Stars plays it safe with are the ones that get left behind on the album. Thankfully the last song, “Filth Friends Unite,” saves the day, as it is the best possible album closer. The intro alone rekindles the energy that Digital Renegade loses towards the middle, and the song only gets better from there, ending the album on a high note.

I See Stars have made a great leap forward from their previous records to Digital Renegade. If you’re looking for an electronica-fused metalcore record to rock out to with the windows down, this is it — just keep your eyes on the road! Longtime fans will appreciate the transition into a heavier style, highlighting ISS’ strengths as a band. Although the album has a lull in the middle, most of the record stands out as the band adopts a renegade style of their own, breaking molds and finding their own sound. Simply put, Digital Renegade launches I See Stars into a whole new universe.