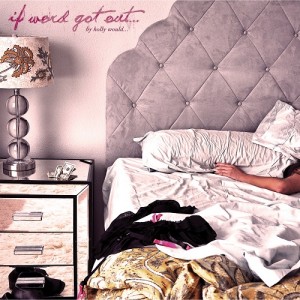 Hailing from Newport News, VA, Holly Would… are a breakout pop rock band with a southern rock flair that’s way too easy to fall for. Just a few months after signing with One Day Savior Recordings, the band have debuted a full-length album that establishes them as a versatile group of musicians that can write a song for just about anybody. Displaying their wide range of influences from punk, rock, and pop all the way to hip hop, If Word Got Out should make listeners excited for the bright future that could lie ahead for this band, but wonder if they’ll take the music seriously enough to get there.

Opening track “Newport” shows off the band’s musical versatility, kicking the album off with a soft electric guitar intro then breaking into a more punk-sounding verse, eventually leading into a pop rock chorus that will be stuck in your head for days. As if that wasn’t enough to get you hooked, follow-up track and first single “Ida” is a more upbeat track guaranteed to get listeners off their feet with an infectious energy. “The Nature Boy” and “xjulietx” add more variety to the album, with a traditional pop punk style reminiscent of Fall Out Boy that’s guaranteed to stir up some serious nostalgia. “Debauchery” and “Last Call” show a clear classic rock ‘n roll influence with a more modern pop twist that presents a completely unique identity for the band. “Parliament” and “SeÃ±orita” slow down the pace of the album while maintaining the high energy established previously with much lighter instrumentals to accompany vocalist David Elliot’s powerful and passionate performances, making for two outstanding and unforgettable tracks.

“Demons” seems out of place at first as the track incorporates rap performances from Big Bizz and Danny Frisch, a startling change when you’ve been caught up in a pop punk record for six tracks. Though this song is not a personal favorite, the band unites their southern flair with a completely different style to make for a truly unique track. Closing track “Delusions of Grandeur” is even more startling, but with a much less happy ending. Although not the strongest song on the album, it makes for a solid closer as Elliot belts out some of the most heartfelt lyrics on the record. But the startling part of the song doesn’t come for another eight minutes after the song ends, when a hidden track unwinds with some incredibly indecent, tasteless, and offensive lyrics that sound like they’re being recited by Dracula on cocaine.

Unfortunately, such an unpleasant ending takes away from the heartfelt nature of the closing track and is guaranteed to leave the listeners who stick around disappointed. While other songs on the record could be deemed exceptional starting points for a deubt album, it’s hard to take them seriously after hearing something so tasteless. This band could go on to do big things, but the hidden track raises questions about whether they’ll take themselves seriously enough to. Ending on such a low note is bound to raise some cynicism, but one can only hope that next time the band will carry their positive energy through to the very last second of the album because the rest of If Word Got Out… shows much promise for the band’s future.