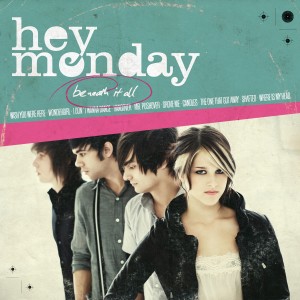 After removing four songs from a potential full-length album, Hey Monday’s camp has decided on releasing Beneath It All as an EP.

With the constant turnover of music and bands coming and going, Columbia Records opted to put its latest project out as an EP at the end of the summer of 2010, with plans for a full length in March 2011.

“We just figured that with the way that everything is right now in the industry, you have to keep putting things out to stay on top,” said Mike Gentile, lead guitarist for Hey Monday.We just felt like if we were to put out a full-length at the end of the summer it just, it wouldn’t be as beneficial to our fans and the band as if we were to just kind of split it up”, said lead guitarist Mike Gentile.

If these are the best six songs that were selected from the original lineup, whatever got left on the studio floor would be rough on the ears.   Cassadee Pope’s voice is front and center on this lackluster effort, trailing behind the standard that was set on 2008’s debut Hold on Tight.   Although her range is present, the ability to push through the noise of the album and shine is missing.   The lyrics for pop-punk songs are not usually the strong point, although “Mr. Pushover” and “Hangover” seem particularly contrived; fans may even find themselves bobbing their head ever so slightly.   The choruses show a lot of promise, but are sandwiched between weak bridges that seem to serve as lead-ins, much like run-of-the-mill pop songs that populate top 40 radio.

“I Don’t Wanna Dance” is the first single and the only song on the EP that can hang with a majority of the tracks on the full length.   This West Palm Beach pop-punk quartet is known for a dynamic live show and showed a lot of promise on its 2008 album, but this is categorically a ‘sophomore slump’ and it is unfortunate that the overall energy of Beneath It All cannot compare to Hold on Tight. (2.5/5.0)

Fans can pre-order the new Hey Monday album on iTunes.