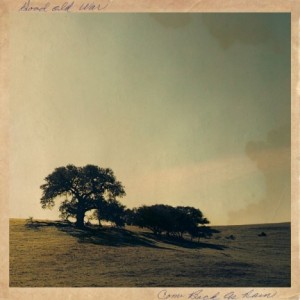 Good Old War’s sound remains simple and folksy with the release of Come Back As Rain. The songs bring the band’s graceful three-part vocal harmonies and twangy, rhythmic guitars to the forefront to create an album that is easy to set on repeat. On the other hand, a few listens through will reveal that the harmonies cover just-above-average lyrics and the folk guitar hardly ever breaks out of GOW’s well-worn pattern: strum, hook, repeat.

Upon hearing opener “Over and Over,” my hopes blossomed for this album. Laden with gorgeous vocal harmonies and driven by lively percussion, the song holds top rank for the album. “Over and Over” sounds like classic Good Old War, reminiscent of “Coney Island” from their debut album Only Way To Be Alone. Later in the album, “Better Weather” and “Touch the Clouds (Taste the Ground)” exhibit remarkably similar tempos, harmonic styles, and overall feeling to “Over and Over,” leaving them to stand in its shadow. Naturally, they feel less special after hearing the same style at the beginning of the album.

“Calling Me Names,” “Amazing Eyes,” and “Not Quite Happiness” represent the slowest section of the album, but still manage to maintain energy. “Amazing Eyes” slides smoothly over honest lyrics and subtle background harmonies, and “Calling Me Names” delves into the electric realm with its instrumentation. Overall, these tracks provide much-needed variance in the album’s constant, uniform pop-folk nature.

Come Back As Rain is an undeniably catchy album with its many guitar hooks and pleasing harmonies. However, the album also treads on the surface of anything heart-wrenching or experimental. It stands as solid material from Good Old War — music relevant this spring, but perhaps not an emotionally resonating “forever” album. When the weather is nice, this album’s mood matches the sunshine streaming in the window.