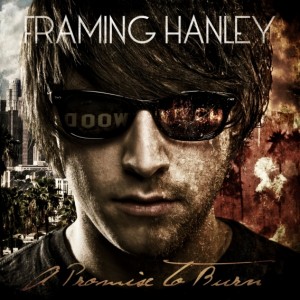 The band mostly known for a cover of Lil Wayne’s “Lollipop” has released its sophomore album, and unfortunately the original tunes fall a little short.

Although the band have explicitly stated in an alternativeaddiction.com interview that “this band is a lot more than that rock band that covered Lil Wayne’s song ‘Lollipop’,” its success thus far may very well be attributed to that fact.

It seems that if you were to take everything that makes 30 Seconds to Mars larger than life and removed the grit and testicular fortitude, you would come up with A Promise to Burn.   This is a pop-infused alternative rock record that simply tried way too hard to fit into the mainstream mold that many bands before them have capitalized on.   While it is very easy to write off the record as filler in an oversaturated market, the accompanying DVD provides an insight into how much time and effort the band put into the making of A Promise to Burn.

The short documentary is a literal track by track walkthrough and places emphasis on the growth of the band.   It is always an eye opener to see band at work in the studio and gives the songs a different life than simply listening through one’s computer or car speakers.   The musical evolution has placed this quintet in a new musical landscape, albeit a slightly stale one.

Even the times where the composition loses its balance, it still retains three of its four legs for the lyrics to wobble on; all the while Nixon makes vocal attempts to save these words but comes up empty. The guitar work of Brandon Wootten and Luke McDuffee create a rhythm section that becomes the driving force for almost every track.   When the snare and cymbals are thrashed by drummer Chris Vest, they pierce through vocals that are supposed to lead the band on a journey through the album and the words seem empty as they escape Nixon’s mouth.   His singing ability is not being called into question, nor is his ability to be eye candy for the popular music consumers; the ability of this band to stand out from the pack is.

This album is not without positive aspects, with songs like “Back to Go Again” and “War Zone” evoking head bobbing and toe tapping, and showing the pop side of the band.   This seems to suit them better than the hard-rock filler that pepper this sophomore effort.   The music written on these songs specifically showcase the true ability of the band, almost countering the weak showings in the songwriting department.

The 13-song, 48-minute effort comes off as a concept album encompassing the trials and tribulations of signing and becoming famous in addition to dealing with the pressures of the spotlight.   The closing lyrics from the last song “The Burn” clearly cap the feelings that this band has to its surroundings, “Let’s burn Hollywood / Cause Hollywood, Hollywood lied / Let’s burn down this angel town / Let’s burn Hollywood to the ground / They took all my dreams and all of my things”.   After everything is said and done, Hollywood may want to send this band back to Tennesee.  (3.0/5.0)