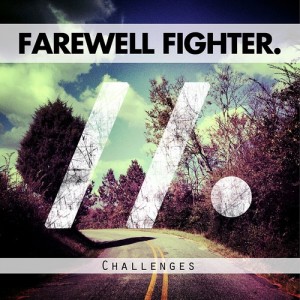 There’s a lot to say about growing up and trying to figure out exactly who you are, and the fact is, most of it’s a challenge. Still, Nashville pop-punk four piece Farewell Fighter are here to reassure that it’s all worth fighting for, despite the obstacles that constantly stand in the way. Their debut album Challenges navigates pressures that most can associate with and it is easily the cornerstone of their career. Built from the most lyrically and musically strong tracks of previous EP The Way We Learn, the album is compounded with six brand new songs that solidify the band’s already established sound. The carefully-thought out combination of new and old is tracked out perfectly as each song smoothly flows into the next. Farewell Fighter have easily picked up where they left off with the EP and set out to make a better, stronger, and more complete set of tracks – which they have undoubtedly accomplished.

“Well Wishing” opens the album with unwavering guitar behind the soft vocals of Ken Fleet. This track is short, sweet, and to the point. Lasting just over a minute, it opens up the album with the general idea of making wishes and trying to figure out who to be. Despite its abrupt end, it flows directly into “Growing Pains” with a burst of energy.

“Fall” is the first taste of new music on Challenges, and it packs a catchy punch and the reassurance that Farewell Fighter haven’t changed. The music is more cohesive and the vocals are stronger, but the overall sound is the same that we fell in love with on The Way We Learn. “Grow” is far more lighthearted and doesn’t quite hold the weight of some of the other songs on the album, but rather adds an easy-going spirit to the whole. It takes a turn in the last minute of the track, slowing down and becoming a sort of anthem that incorporates group vocals and gives the song a little more substance.

“Bridges” is fast-paced and energetic, filled with driven guitars, pounding drums, and a true display of Fleet’s powerful voice. He sings at the top of his lungs for the majority of the song, but the lyrics are pointed and strike home. One verse is particularly relatable as Fleet sings, “’Maybe you should be more like them’ / Well I guess I just wasn’t cut out to fit in / I’m over getting older / And I lack the strength of heart to start again.” Though the lines seem like giving up, the song takes its title from the line, “I’m ready to burn this bridge for a better way,” which sounds a lot like moving forward.

The sixth and center track is none other than “Love, Lust, or Losing It?” which is perhaps the band’s catchiest jam to date. Its fast pace and witty lines are just the beginning, because when the melodic chorus hits, there’s no way not to love this song. However, just after comes “The Bend,” which is the closest thing we’ve seen to a slow song from the band. The guitars are low and heavy below Fleet singing, “It’s not what we have that makes us whole/ It’s the things that we let go.” The last few moments of the song are simply Fleet’s slow, poignant chorus over a few guitar notes, but make for some of the most powerful moments on the album. Given their musical quality and lyrical strength, slow music could easily become a part of their repertoire and sure enough, “The Bend” leaves me craving a few acoustic bonus tracks.

“Epitaph” is the final new song, opening with a beat led by claps and staccato picked strings. It’s a lighter, almost pop track that provides a good change of pace for Challenges, even if almost at the end. The strings fade out by the middle and that edgier rock guitar streams back in once more.

The last song on the album is also the last song on previous EP The Way We Learn, and it serves as the perfect closing track as it sums of the ideas and message of both releases. The song is slow and steady throughout, and the lyrics are essentially a summation of the lessons learned the hard way. However, the final verse assures, “We are golden because we’re alive,” and, despite the mistakes made and those still to come, every day you are given a fighting a chance to keep going. In all, “Golden” is that beacon of hope in a tunnel of challenges reminding us not to give up.

Each song on the album has at least one notable guitar riff, cymbal-crashing drum beat, and catchy as hell chorus that stick with you from the first moment, but it’s the relatable lyrics that grow on you after so many plays that you’ve memorized them. Fleet sings about difficult feelings and obviously overcoming challenges, but they are the simple everyday experiences that most people struggle with too: fitting in, having worth, following dreams. Yet, despite the obstacles detailed in the lyrics, every song is hopeful. This album absolutely lays out a slew of challenges that can seem overwhelming, but the point of the record is not to simply point out these challenges but instead to prove that they can be overcome.