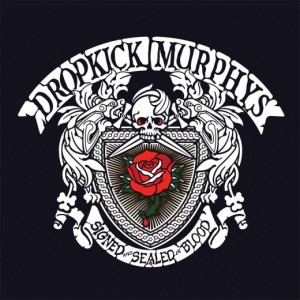 In theory, it should be a sin to take the ethereal, whimsical sounds of Celtic folk and violently discard their charm for an ear-bashing, bagpipe squealing, vocal shrieking, and guitar blistering drunken mess. As it turns out, the punk-inspired Boston bombast version of John Ryan’s Polka creates a refreshing spark of innovation in the world of punk. Famous American Celtic rockers Dropkick Murphys continue to do what they do best on their new album Signed And Sealed In Blood by binding traditional roots with the spirit of both Bruce Springsteen and the Sex Pistols. However, far too often can one can find themselves feeling like a wasted sailor hunting for whale oil like some decrepit Moby Dick character while listening to the album. While this lively, internationally-influenced band may be keeping their Irish power-punk alive, the repetitive fast-paced beat of the drums and the deafening jarring vocal screeching are starting to ware on the band’s authenticity.

Signed And Sealed In Blood opens with the legendary love theme for die-hard fans entitled “The Boys Are Back.” As if you didn’t get it the first time with a chorus chanting the title’s name in the midst of bagpipe bellowing and accordion smashing, then you most certainly will have understood its meaning by the transition into “Prisoner’s Song.” Sounding like a re-make of “Shipping Out to Boston” (made famous from Martin Scorsese’s impeccable movie The Departed), “Prisoner’s Song” is the first instant reminder that while Irish balderdash can be a fun stress-releaser, it is true that old dogs cannot learn new tricks. From the primal energy of “Burn,” whose angry chords and blaring screams from the tips  of the vocal chords of All Barr and Ken Casey act as the perfect soundtrack for doing something reckless, to the bodhrÃ¡n thumping beats of “My Hero,” this tough sound becomes a dirge. It comes to life only slightly with songs such as “Rose Tattoo,” which features vocals similar to Tom Morello, a choral melody similar to “Na Na Na Hey Hey Hey Kiss Him Goodbye,” and a spark of instrumental Italian influences.

Offering more credit to the sustaining originality of this rather overdone sound are songs like “The Season’s Upon Us,” which although thrashing out the same Boston-based banality offers the rarity of a Christmas song on an unseasonal release and offers comedic relief with lyrics about despising family members and destroying teddy bears. “Jimmy Collins’ Wake” provides another album rarity–this time in a breathtaking utilization of instrumental irony. Although about a man’s wake, the tone is effervescent, creating a celebratory song of death in a sea of traditional minor key-infested laments of loss. Along with the creativity of “Jimmy Collins’ Wake” comes “Out of the Town,” a concept piece that in itself is a lost lyrical breed which tells stories like Springsteen. But perhaps the one true gem on Dropkick Murphys’ latest album is an emotional, breathlessly melodic piano based theme entitled “Don’t Tear Us Apart.” The title track’s heartrending lyrics easily could be heard echoing across the entire length of Pilton Farm in Glastonbury or Grant Park in Chicago as a festival favorite.

With a traditionally-rooted sound, varied instrumentals, and fired-up vocals amplifying the soul of this much-loved genre, the Dropkick Murphys have a sound all their own. But as inspiring and avant-garde as this variation of simple American punk is, it is safe to say that this band has played all of their cards. The constant overuse of aggressive howling combined with the emphatic blur of hammering drums, guitars, and bagpipes unfortunately creates a commonplace charade in the place of this band’s pioneering spirit.