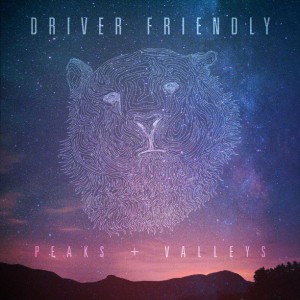 High school bands are typically a dime a dozen, and they usually split up not long after graduation. Alternative rockers Driver Friendly, however, have not fallen to the same fate; the group formed in 2002 and haven’t looked back since. After relocating to Austin, Texas in 2004, the band self-released two albums and a few music videos before signing to Hopeless Records in 2012. One listen to their latest EP, Peaks + Valleys, and you’ll know why the band is gaining momentum like they are. The six songs on the EP are short and sweet, but are chock full of energy, passion, and a whole lot of fun.

The first track, “Run,” sounds pretty familiar with its relatively simple guitar riffs as the driving force behind the song, but when you scratch the surface you see the true depths in the lyrics. The song deals with staring down your challenges and barreling through them, seen in the chorus with lead singer Tyler Welsh proclaiming, “We stared defeat down into the bottom of its soul, put back the pieces till we felt whole.” “Canyon,” the following track, has so much appeal that the chorus is sure to be stuck in your head for days (hopefully much to your delight). As with its predecessor, it is within the lyrics that the song shines. Then there’s “Ghosts,” a barely-two-minute-long, Man Overboard-esque screaming refrain of, “It’s not death that scares us, it’s the ghosts we cannot see,” which is sure to cause most listeners to take a step back and think a little introspectively for a change.

“Messidona,” which the band released Tom Hanks-inspired video for that caught the attention of Hanks himself, turned out to be a personal favorite. With its horns and canon-style chorus, “Messidona” sounds a bit different from other songs on Peaks + Valleys. The message of the track ties into the preceding song, talking about always keeping the past in mind but continuing to look forward. This theme is most obvious in the start of the second verse – “I hear voices from the grave whispering my name, reminding me all the time, ‘we’re only what we leave behind.’” The fifth track, “Shark Cave” has a slight vintage feel to it; its staccato beat and short guitar riffs are reminiscent of the ‘80’s – until the chorus, that is when the song takes on a completely different feel. The chorus also contains a very impactful and relevant message, “I want to look with my eyes and say I am alive, even when I’m broken,” driving home that even when you’re at your worst, you’re still alive.

The EP concludes with another pick-me-up in “Let The Sun Come Up.” This track, as well as the previous two, shows a more mature side of the band. The chorus sings high and loud, “Let the sun come up, take it all in / I’m not afraid, take all of me / Don’t let it fade away, let the sun come up.” The song sounds a bit similar to Biffy Clyro’s 2009 album Only Revolutions, especially within Welsh’s vocals. The only problem is that it is just too damn short of a song.

The EP itself is only disappointing in how short it is. The six songs are simply not enough to show what this band is truly capable of, but it certainly does whet your appetite to hear more of what they can do. Driver Friendly have a ton of energy, and Peaks + Valleys certainly shows it. It will be exciting to see what comes next from these guys.