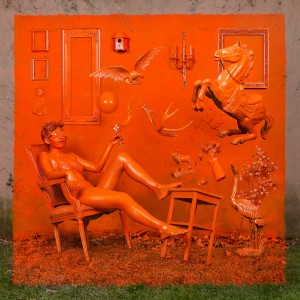 Diamond Youth are an interesting product of the 21st Century: the band was made possible via the Internet, using iChat and GarageBand to record from all over the country, and despite consisting of members of brutal hardcore acts Trapped Under Ice and Down to Nothing, Diamond Youth brings a unique, dreamy take on the nostalgic sound of 90’s alternative rock. Now signed to Topshelf Records after their first independent release Don’t Lose Your Cool, the band is starting to slowly leave the summer pop vibe of their debut for a darker feeling on their latest EP, Orange.

Orange opens with one of the album’s catchiest tracks, “Cannonball,” which immediately introduces the band’s haunting, matured sound in the opening guitar riff. The recurring “ooh’s,” as well as the instrumental bridge, would not sound out of place on a Muse album, along with the crunching guitar melodies and smooth layers of vocals. Enlisting the help of producer Brian McTernan (Hot Water Music, Circa Survive), the band sounds much tighter this time around. For an album pieced together from several locations, the instruments all blend together seamlessly in melodic waves that crash over you. Justin Gilman’s voice has attained a new ethereal quality through the entire EP, allowing it to soar effortlessly over the rest of the mix. The next track, “Separator,” further exemplifies this dynamic when Gilman’s dreamy falsettos calmly float over the charging rock instrumentation underneath.

“Come Down” initially returns to the band’s surf-pop sound, reminiscent of the Beach Boys, with a meandering clean guitar riff for the first third of the song before the band dives headfirst into a rampant Foo Fighters-esque tone for the remainder. Gilman’s weightless, otherworldly voice perfectly matches the song’s story as he sings, “Even if I come down / You’re still far away,” painting the image of a man trying to escape heartbreak by floating away from the pain left behind on the ground. Title track “Orange” continues the trend of 90’s rock and roll while also bringing back the irresistible “ooh’s” from the first track. Gilman’s voice is especially silky, skimming over the explosive drums and guitars to create what sounds like a fusion between Green Day and Muse. Closer “Lola” effectively serves as a blanket tucking in the record at the end of the day. The haunting vocal runs blend together with the mixture of clean and distorted guitars to form aural layers that completely envelope the listener, leaving them comfortable and satisfied.

In a world where many criticize modern music for being overly artificial, Diamond Youth bring something genuine and refreshing to the table with Orange. Combining the best of the 90’s, Diamond Youth have proven themselves to be more than a side project, sculpting several EP’s that will leave fans yearning for a full-length release. With nostalgic alternative rock making a comeback with bands like Hot Water Music and The Menzingers, Diamond Youth are sure to ride that wave, carving out a niche for themselves in the current rock music scene.