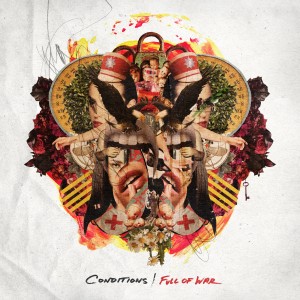 The Virginia-based Conditions have taken a firm step forward with their second full-length Full Of War. The 11-track album is brimming with thoughtful lyrics and steady melodies that will get stuck in your head immediately. Full Of War is an incredibly well put-together record that sees Conditions proving their strength once again both lyrically and musically.

“Walking Separate Ways” opens the album and grabs attention immediately with low, brooding vocals singing the first line, holding it steady when the fast-paced drums and guitar stream in at the verse. The track is complete with memorable lyrics to match, making it easy to envision a crowd of fans singing the words along. “Open Eyes” sets up the first set of upbeat songs with an even sound and lingering lyrics, “We build our walls and hope they never fade away/ What feels like comfort ends up being our decay.”

“Best Mistake” and “Love Elusive” both open with a steady rhythm that sets the pace high through the verse and then barrels straight into two of the catchiest choruses on the album. “Best Mistake” describes the blurring line between love and lust with the forceful energy that seems to embody the album. “Love Elusive” seems to be most reminiscent of previous album Fluorescent Youth and melds multiple topics into a single, full-bodied track. If one track had to sum up Full Of War, “Love Elusive” would be the best choice.

The album deals with themes of damage, choice, time, and love through some of Conditions’ strongest lyrics to date. Tracks like “Everyday is a New Life” express that “the broken state of everything is making broken humans,” but also reassures that everyday is another chance to take back control with lines like “I know my life doesn’t have to feel this way / The darkness doesn’t have to swallow you whole / Oh, I swear you’re in control.”

Each song also deals with emotion as only Conditions can – with equal parts sincerity and vigor. The coarser tracks “Skeleton” and “The Descent of Man” stay loud and on the verge of angry with power-packed choruses and distinct verses that still contain a strong message. “Wonderful Lie” and “What We Wait For” are calmer narratives of passing time, and more importantly, wasted time. Set in the middle of the album and just before the final track, their placement notes the fleeting nature of moments just as the vivid lyrics do.

One of the more contemplative tracks, “Long Division,” describes the not uncommon battle between God and science. It’s a smoother song that fully rounds out the themes of Full of War, acknowledging the war within and the choices that accompany it. In the end, “You may side with science / You may side with God / but you’re human being above it all” proves to be the thesis of the song and one of the strongest lines on the album.

Finally, “Not Giving Up…Not Yet” wraps up the album with a note of strength and hope. Thematically, the track mentions imperfection but serves as a reminder that anything worth having is worth pursuing and enduring. It is perfectly described in the second verse with the lyrics, “I have run my hands through heaven/ and I have dipped my feet in hell but my days have served me well/ I know how to lose everything and pick up where I fell.”

Conditions push undeniably forward with Full Of War, providing both a fully energetic and more melodic sound as well as the contemplative lyrics that fans have come to expect. Though it has been nearly three years since their last album release, Conditions have proved that it takes time to move forward and create a powerful sophomore record – but they’ve also proved that it is worth the wait.