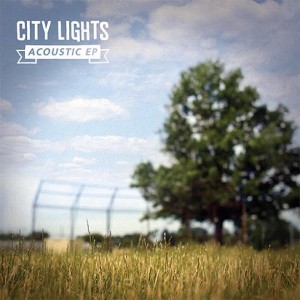 City Lights first burst onto the scene with their 2011 full-length debut In It To Win It, a refreshing and irresistibly catchy take on pop punk, sounding like a mix between Hit the Lights and Four Year Strong. After multiple tours with bands like Mayday Parade, The Dangerous Summer, and Set it Off, not to mention a slot on this year’s South by So What Music Festival, City Lights are slowly but surely making their way up the ranks. Taking five songs off of their full-length, the band wrapped up 2012 with their Acoustic EPw, proving they can do more than easycore breakdowns.

The first track on the EP, “I Made a Song on Garage Band and All I Got Was This Lousy Record Deal” boasts a title that would make even Pete Wentz jealous. Previous City Lights fans will remember the original rendition relied heavily on chugging guitars and energetic drums; however, their acoustic interpretation strips the song down to a couple unplugged guitars (and just a tinge of cowbell near the end). Vocalist Oshie Bichar sounds much more vulnerable in the mix, like he’s in the room singing right next to you. This allows him to inject more emotion into the heartfelt lyrics as he sings, “This is a call to anyone who’s listening / Change is coming sooner than you think.” The band continues to amp up the sensitivity with the only outright love song from In It To Win It, “My Entire Life.” Unsurprisingly, this song resonates much better softer and slower, making it one of the best song choices for the EP. After hearing this version, every girl will wish this song was about them. The layering of vocals is extremely effective as well, with guitarist Jeremy Smith’s smoother voice complementing Bichar’s lead vocals.

Unfortunately the next song “Trophy Room,” a typical pop punk song about a merciless girl who takes advantage of men, sounds empty without a blistering drum beat and guitar riffs to head-bang to. The band awkwardly struggles to maintain the song’s energy with just an acoustic guitar. While a catchy track regardless, with strangely enjoyable lyrics like “She’ll never give up / ‘Til she’s got my insides / Hanging in her trophy room,” most people will probably prefer the full band version. The band redeems themselves on “Please Let Me Know,” a nostalgic track that anyone born before this century can relate to, especially the ode to better times when “people didn’t spend all their time talkin’ shit on the Internet.” The band closes the EP with the same song they closed their LP with: “What It Takes,” the only song on the album that isn’t pure pop punk, but closer to straight up rock. The LP version is absolutely relentless, yet the stripped down version is powerful in another sense – it forces Bichar to step up and fill the track with enough strength and passion to replace all the missing instruments.

With a couple hits and misses, the Acoustic EP effectively reveals another dimension in City Lights’ sound, especially Bichar’s voice, which shows a lot more depth this time around. The EP also serves as an enjoyable companion to the full-length until the band releases their next record. City Lights might seem a little too generic for some pop punk aficionados, but they’re catchy as hell so you might as well give in and enjoy them since they won’t be going away anytime soon.