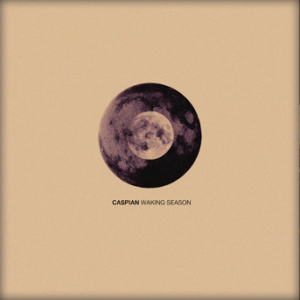 The latest album from Caspian, Waking Season, embodies ambient, not only the genre but the fundamental meaning of the word. There are few other ways to describe the feeling evoked upon listening to this release. Each of the tracks is beautiful in its own right, but when banded together seamlessly, they create an extraordinarily thought-provoking and relaxing musical experience. Incorporating new elements such as a string quartet, chilling and natural sound effects, and haunting vocals into their usual blend of post rock, Caspian have created an album that is always full in sound but somehow never overwhelmingly noisy. Produced by Matt Bayles (Minus the Bear, Russian Circles), Waking Season reveals obvious progress not only for Caspian as a band but for the genre they represent.

What sets Waking Season apart from its predecessors and Caspian apart from their contemporaries is an apparent effort to never be too aggressive. While post rock can often be overwhelmingly melodic and intense, Waking Season is delicate and textured without lacking edge or direction. The title track eases us into the album with a repeated piano melody that is met with the sound of wind, an airy undertone of string instruments, and the increasingly aggressive tap of a drum – all of  which make what could have been a boring crescendo a captivating one.

Like the piano of the opening track, the standout elements of the remainder of the albums songs are always placed tastefully and with purpose. The heavy guitars and chilling vocals in “Gone In Bloom and Bough” complement each other perfectly rather than highlighting one another. The synths and violins of “High Lonesome” blend gracefully, causing a tension that would typically build up to an explosion of sound but instead subtly advances to silence. It is moments like this that make Waking Season an album that keeps you guessing,  even after multiple listens.

If loud and in your face is what you love, Waking Season may not be the album for you, but don’t let that stop you from giving it a listen. There are guitar parts in “Long the Desert Mile” reminiscent of classic rock, punk-inspired distortion in “Fire Made Flesh,” and countless other influences subtly woven into an album that manages to bring everything together and stay  cohesive.

Waking Season is one of a kind, beginning to end. Its perfect balance is something that hasn’t been achieved on many albums like it and its wide variety of musical and nonmusical elements makes for one of the most diverse-sounding post rock albums. If a picture is worth a thousand words, the cinematic quality of this album is worth ten thousand.