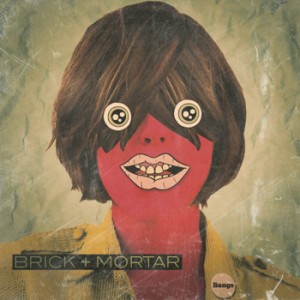 Returning with their second EP and latest since 2010 are Asbury Park, NJ duo Brick + Mortar. Composed of Brandon Asraf on guitar, bass, and vocals and John Tacon on drums, the band has diligently worked towards this release, titled Bangs. It should be noted, however, that this EP isn’t like an addicting pop song or a catchy rock anthem. It’s not going to appeal to everyone right from the start, but while that might be considered a setback, it’s also an aspect that sets the band apart. Bangs can be different for every listener that way; only after a few times on repeat do the songs begin to become etched in the mind and fully appreciated. The album also manages to be quite versatile; some tracks use whistling, clapping, and electronic samples to help create melodies, and the use of these distinctive sounds adds depth and interest to their music.

Opening the EP with a dense rhythm and raw vocals is title track “Bangs.” Low guitar notes, slow-paced drums, and high-pitched keys all come together to make this song thick with sound, but each individual layer is an easy beat, tune, or line. The complex feel that Asraf and Tacon are able to produce is remarkable considering the simplicity behind the song. “Heatstroke” then leads Bangs into a lighter direction with an offbeat drum pattern and calmer guitar. Asraf sings with an effortless honesty that is catchy in an unexpected way.

“Keep This Place Beautiful” dives into a moody melody once more, but the thoughtful lyrics and lighter chorus make this a song that’s easy to keep on repeat. Asraf sings the chorus, “We could have all the good things, if we just try/ Or we could change the world/ Yeah we could change the world/ We could turn all the bad things into good things, if we just try.” The track optimistically calls for change without sounding preachy, a feat in itself. The music behind the words is just as strong, with claps reinforcing the beat, a buzzing bass, and the perfect amount of echoing vocals.

“No I Won’t Go” starts with just bass, drum, and a gentle whistle. Asraf’s vocals are low and simple on the verse, but the chorus proves to be one of the catchiest on the EP. Perhaps it’s the repetition of the title, “No I won’t go,” the simple addicting melody, or Tacon’s steady and rhythmic drumming throughout the track, but this song was made for movement. It would be a great song to hear live from the band. “Old Boy” is the most upbeat and driven track on Bangs. Tacon pounds away on rolling drums from the very start and never stops the beat. The bass is overpowered at times by the strong vocals and rowdy drumming, but that bass line keeps the track firmly anchored in the rhythmic style of Brick + Mortar.

“Terrible Things” continues the upbeat power from “Old Boy” with slightly more forceful drums and cymbals and contrasting keys. The vocals feel strongest on this final song as Asraf drives through the chorus, singing, “Sometimes I think of doing terrible things/ I know I shouldn’t think it but I do anyway.” Despite the internal thoughts described in the lyrics, the song is not calm and pensive. The big sound on this track truly ends the EP with a bang.

In all, the EP is absolutely solid, without a single weak track. Brick + Mortar have a unique and strong sound that is catchy and satisfying in an unexpected way. The production on Bangs is seamless and captures the band’s sound completely. This two-man team has managed to make untraditional music that will still appeal to traditional ears. This EP may not be the duo’s first effort, but it does mark a new standard for what’s to come in the future. You’ll want to familiarize yourself with Brick + Mortar sooner rather than later.