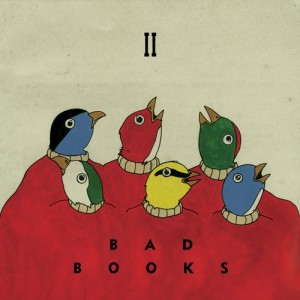 Bad Books’ appropriately-named II is a collection of songs with great variety yet a common, wistful edge which ultimately creates a cohesive and earnest album.  The ten tracks share a lulling musicality which allows the listener to lose themselves in the layers of tender vocals and smooth instrumentation.

Within the first three tracks, the phenomenon is readily apparent. Opener “The After Party” is deliciously languid with its echoing pangs of guitar and gentle, lulling buildups throughout. It transitions to the punchy “No Rewards,” which uses substantial bass riffs and vocals to build up to chanting refrain of “It’s such a lonely life” that sticks with you even after the last notes die down. Immediately after, the dynamics of the album reroute again as “Forest Whitaker” delivers a chilling vocal clarity in Kevin Devine’s crooning. The lyrics are very palpable; the song creates a tangible storyline but the mood is applicable to any listener. It’s bittersweet – the bouncing electronic tones in the background contrast with the sheer melancholy of the happenings to create an effective, intriguing dissonance.

The latter half of the album has the capacity to squarely hit the heart, but since it never strays from a feeling of catharsis, it’s worth the bittersweetness and frankness hiding in each chord and lyric. “Pytor” kicks off this heartfelt vibe, and the final two songs seal the deal. “42” drips with nostalgia and strife, and Devine’s voice fades and rises at all the perfect places to pull the listener right into the very soul of the song. Finally, “Lost Creek” ends the album with prominence as it simmers its way through delicate vocal harmonies, strong guitar work, and riveting percussion. It obviously has great personal meaning to the songwriter while still eliciting a surprising wave of nostalgia in the listener. It holds the aching emotion of looking back on years past with a stirring sense of immediacy, and closes II on a memorable note, to say the very least.

II has the flexibility to apply its beautifully crafted overarching emotions and melodies to any audience and will undoubtedly conjure individual memories for each listener. It fits the mood of autumn: as the leaves change, it is a time to exist with nostalgic memories of summer, the anticipation for winter, and the tangibility of the present. II is incredibly honest both vocally and instrumentally, and its gentle nature holds enough power to haunt even after the music stops.