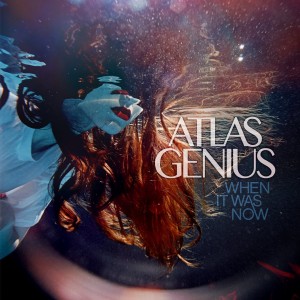 Having just formed less than two years ago, Atlas Genius’ career has skyrocketed thanks to the modern invention of the Internet. Originally hailing from Adelaide, Australia, the band’s first single “Trojans” exploded in popularity after being discovered by the blog Neon Gold, and soon after the song could be heard playing on major rock radio stations across the United States. With just one song in their discography, Atlas Genius signed to Warner Bros. Records and have just released their debut album, When It Was Now – proof that the band is capable of producing more than just one infectious indie rock song.

The album opens with “Electric,” introducing the fact that the band is an amalgamation of both acoustic instruments as well as electronic elements. The song starts with layers of bright synths and guitars before Keith Jeffery’s soft, laid back vocals enter, resting on the instruments like a pillow. The verses are slightly mystical in their minor tone, while the choruses contain catchy, upbeat indie pop. There is definitely something other-worldly in Atlas Genius’ music in general, especially Jeffery’s ethereal voice. When listening to this album, you feel like the girl on the album cover, stuck halfway in some kind of underwater haze.

Atlas Genius continues their love of short, insignificant words with the next song, “If So,” which is probably one of the best songs on the album. The song opens with a feel-good guitar riff and impeccably tight rhythm between the drums and bass before continuing into a chorus that will ring in your head for days. The band successfully utilizes simplicity, getting their message across in as little words as possible. That simplistic theme continues into “Back Seat,” a song originally found on their debut EP, Through the Glass. Drummer Michael Jeffery and bassist Steven Jeffery still maintain their solid rhythmic connection throughout the song, but the song is much more stripped down than the first two, implementing silence as one of the instruments in the mix. At times, Keith Jeffery’s haunting voice floats over just the rhythm section and some plucked guitar.

Also included on the record is “Trojans,” the infamous track that single-handedly launched the band’s career two years ago. Subtly catchy, the song features bright guitars and short, simple lyrics like “Take it off / Take it in / Take off all the thoughts of what we’ve been.” Keith Jeffery carries the song, managing to find the perfect balance between melancholy and hope in his calming tone. After “Trojans,” the rest of the songs begin to sound very similar, utilizing layers of synths, steady drum beats and clean, bright guitars, with few standouts. The re-released “Through the Glass” begins with just a bass drum and acoustic guitar with the verse bordering on country at times, yet it sounds like one of the most organic songs on the album. “On a Day” is a more energetic song, featuring a backbeat that makes you wanna dance, while “All These Girls” is probably the closest thing the band has to a party song with lyrics about falling in love with a girl during a drunken night out. The record ends with “Symptoms,” another song from their EP and one of the dreamiest ones on the album as Keith Jeffery’s voice floats over the mix and melts into your ears, easing you into sleep by the time you’ve finished listening to the record.

Indie rock has been growing exponentially popular in the mainstream, aided by bands such as Foster The People and Walk The Moon, and newcomers Atlas Genius are sure to make their mark in the scene with When It Was Now. With smooth vocals, lush synths, and vivid guitars, this album is perfect for long drives or relaxing with your friends. While some of the songs may sound too similar, risking forgetability, there is no denying the talent of Atlas Genius. It is already impressive enough to achieve worldwide fame and a major label record deal off one song posted on the Internet. With a full-length now under their belt, it is obvious that Atlas Genius are not a one-hit wonder – they are here to stay.