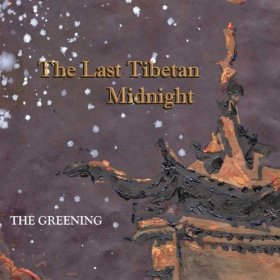 Electronic and dance inspired music seems to be all the rage these days.  For anyone looking for a departure from the oversaturated genre, look no farther than The Greening’s The Last Tibetan Midnight.

After self-releasing its debut LP After Shoal Parlor in 2003, the San Francisco psychedelic rock group has spent the past seven years touring up and down the west coast, saving to create their own studio, and writing three albums worth of material. The Last Tibetan Midnight was released on Feb. 16, and if nothing else the release shows that the band has already succeeded in living up to their stated mission of trying “to push pop music to new frontiers through their blend of accessible experimentation.”

With a vibrant, lighthearted sound that is decidedly retro, the group manages to capture the spirit of classic rock and pop acts of the past but reinvent the style in a way that is both modern and accessible. The Greening are certainly not for everyone, but anyone who grew up listening to classic rock acts of the 60’s and 70’s and enjoys music from the era is bound to be impressed by the effort.

The album starts with “Black Lotus” a groovy track that begins with an upbeat guitar riff before slowing down and breaking down into a psychedelic medley full of synth and keyboards. The track serves as a great introduction to the record, as even within one song the band transitions eloquently between musical styles. At the end of the track lead singer Karl Meischen repeatedly croons “And you I know I can’t find out in the morning/I can’t find out yesterday,” in a manner reminiscent of The Beatles.

“Belong With Me” is a more straightforward poppy love song with harmonies that conjure images of the Beach Boys. The track demonstrates the group’s ability to construct elegant songs with multiple layers that are still catchy enough for the radio.

One of the album’s stand out tracks, “The Tangerine Floating in Ink” starts off as a fairly simple guitar based pop song, but the addition of horns and strings, a few key changes and keyboards give it a lot depth and very full sound. A beautifully crafted song, this is evidence that the group has a knack for experimenting with varying musical structures in a way that does not feel forced.

On “Thought I Told You,” the band takes a stab at the epic ballad type song that characterized groups like Led Zeppelin and Pink Floyd. Clocking in at 11:04 and lacking any sort of rigid structure or catchy hook, the song is by far the least poppy on the album.  Haunting instrumentals and vocals, effective use of synth, and some fairly impressive guitar solos make this a great closing track; this is where the members really show their ability to perform full out psychedelic rock.

The Greening has put in a lot of hard work and dedication and over the past 7 years and it clearly shows on this album.  No single element of the band seems to stand out, but as a whole the group has a cohesive sound and Meischen is a talented vocalist whose style perfectly matches the band.

Whether or not they will find mainstream success is uncertain as their sound is definitely one that seems better suited for the past, but for any one looking for a modern band’s take on the classic rock sound, this is a release worth checking out.