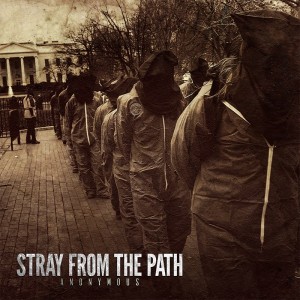 The always-rebelling hardcore quartet Stray From The Path continue to push the envelope with their seventh album and fourth release via Sumerian Records, Anonymous. Though their entire repertoire is an obvious homage to their influences, Stray successfully embody everything those inspirations stood for, embracing their roots while paving the future of a resurfacing class of anti-establishment hardcore. After seven albums, the counter-culture content of their music hasn’t exactly strayed (see what I did there?), yet their venomous attacks on the status-quo are always driving us to smash our fists into the wall until our knuckles bleed. These Long Island heavyweights are their own breed of chaos and haven’t dropped their middle fingers since their original lineup broke into the scene in 2001. This group is all about the delivery, getting the message across with gut punching riffs, gang vocals, and vocalist Andrew “Drew York” Dijorio’s infamous “bleck”’s. Bottom line: you’re moshing.

The two opening tracks, “False Flag” and “Badge & a Bullet,” already have the band pointing fingers. Arguing that the stars and stripes are a false symbol of hope and freedom, “False Flag” is a standard SFTP track that draws heavily from Tom Morello’s guitar sounds. “Badge & a Bullet” is an unequivocal tribute to “Killing in the Name” and an unsympathetic tirade towards the men in blue, with lyrics that might be carved with a shiv on a prison’s cafeteria table. Even though the band is very forward with their judgments on society, they intend to increase awareness and open fans’ eyes to the inequitable world we’re living in. Instrumentally, the band is definitely progressing — the bridge riff on the single “Landmines” is one of the heaviest I’ve heard in a long time. All of the tracks are technically interesting and easily hold attention; they’re not too repetitive while not incessantly changing.

While the entire record is extremely engaging, it does tend to get a little monotonous and at times somewhat silly. Selfies with an abundance of hashtags are just as irritating on the internet as they are as a song topic (“Counting Sheep”). The average listener can’t absorb the full 10-song rebellion in one sitting, but rather in small doses. Fans will quickly disregard the tracks that disinterest them. Guest appearances by Jason Butler of letlive. on “Scissor Hands” (my personal favorite from the record) and Stick To Your Guns’ Jesse Barnet are added bonuses, but are not pivotal points in the track listing.

Overall, Stray From The Path have added a compelling and captivating record to their ever-expanding body of work. Despite its moments of uniformity, Anonymous has the world intrigued and situates the band in a category all their own. They’re the best at what they do because they’re the only ones who do it and aren’t afraid to call out injustices, which embodies the true purpose of punk and hardcore. Anonymous is a testament to their predecessors and a manual for their successors.