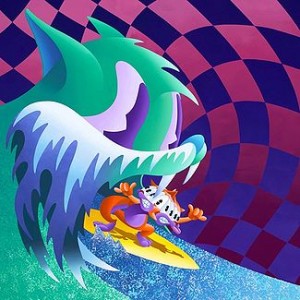 Get ready for the most melancholy trip to Urban Outfitters ever.

That’s because MGMT is back with a halfhearted second album that recalls the trippy 60s without any of the good vibrations. And as much as Congratulations leaves to be desired, it also leaves fans wondering: what happened to the MGMT of three years ago?

The band’s debut effort, Oracular Spectacular, which Rolling Stone named one of the top 20 albums of the 2000s, set the band up to potentially be one of the biggest indie acts of the decade. Its shimmering psychedelic melodies had turned the duo behind it into a pair of international superstars. But with its second release, MGMT produced an underwhelming batch of forgettable faux-60s pop songs and showed itself to be badly suffering from the sophomore curse.

In their attempt to aim for an album that strayed from the formula that earned it two Grammy nominations and millions of fans, the band’s members even admit to falling short. Ben Goldwasser, one half of the group, described the album himself by saying, “There definitely isn’t a ‘Time to Pretend’ or a ‘Kids’ on the album. We’ve been talking about ways to make sure people hear the album as an album in order and not just figure out what are the best three tracks, download those and not listen to the rest of it.”

Unfortunately for the band, though, Congratulations not only lacks a solid single, but also any potential smash hits or sing-along favorites as well. In addition to having one of the most nonsensical album covers in recent memory, MGMT’s second effort fails to deliver any of the charming pop that made the band enjoyable in the first place. Anyone looking for the catchy melodies and keyboard riffs that made Oracular Spectacular one of 2008’s best albums will have a hard time locating them here.

The record starts off with “It’s Working,” better known as harpsichord-fueled hippie pop that could have been left over from the Hair soundtrack. The weak introduction then gives way to “Song For Dan Treacy,” a meager attempt at bouncy 70s Britpop with a misplaced, over-the-top haunted mansion organ line. Thankfully, the last 30 seconds of “Someone’s Missing” recreate the old MGMT, though the gloomy atmospheric blandness of the first two minutes are likely to lull listeners to sleep.

“Flash Delirium,” which the group insists is not a single even though it was the first song released to the public and even though it produced the only video from the album thus far, was criticized critics and fans alike for not sounding anything like they had hoped. Worse, it even necessitated an open apology from the band members themselves after they tried to pass it off as a joke. Ironically, when heard alongside its lethargic counterparts, the song is actually one of the only tunes that might have any viable chance of making it to the radio.

Song after song, the album drags along as the duo rips off its most unimaginative predecessors one by one, including acts such as The Band and America. Forced psychedelic novelties are substituted in place of actual soul, resulting in the tepid “I Found A Whistle,” which may truly be all about the excitement of finding a whistle. Then there is the sleep-inducing “Siberian Breaks,” a 12-minute epic that feels like the product of multiple songs that were too feeble to stand alone and crammed into one awkward piece. Ambitious? Yes, for some, but it was written 40 years too late and four times too long.

The band has stated that it wanted to prove it could do more than just write catchy, dance-friendly nuggets of pop perfection. It achieved that goal with Congratulations, a collection of mostly filler material that lacks any real soul or emotion, let alone the youthful energy for which MGMT is known. Admittedly, it is hard to judge this record without comparing it to the group’s previous work, but one wonders if this prattling gibberish would have ever made it into the hands of the public absent the band’s established popularity. Still, the difference between its breakout and follow-up efforts is enormous. If Oracular Spectacular is the soundtrack to the best Saturday of your entire life, then Congratulations is what plays when you’re trying to kick that nasty Sunday hangover.

Congratulations can be purchased on iTunes.