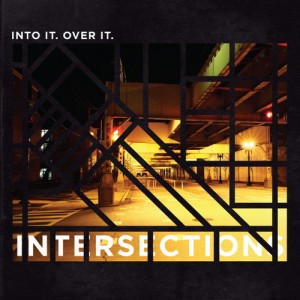 People who say multitasking is impossible have obviously never heard of Evan Weiss. The indie/emo poster boy collaborates with countless others and currently splits his time between Pet Symmetry, Their/They’re/There, Stay Ahead of the Weather, his solo project Into It. Over It, and probably a plethora of other bands we have yet to hear about. After several splits and unorthodox releases, Into It. Over It. released its first regular full-length in 2011, the extremely well-received Proper. Since then, Weiss found the time between touring constantly and recording with all his other projects to release another full-length under his solo moniker. His follow-up album, Intersections, still contains his signature vivid guitars and genius lyricism, but ditches the more straightforward pop melodies for something rawer yet more complex.

Opening essentially where Weiss left off in 2011, “New North-Side Air” features a guitar riff notably similar to the one in “The Frames That Used to Greet Me,” Proper’s closing track. The first obvious change on this record is the production, or lack of it. It feels like you are in the recording studio hearing the instruments as they are being recorded. The drums especially sound rougher, probably attempting to combine the lo-fi feel of his initial releases with the polished production of his full-length. Overall, the opener feels similar to Proper with a smooth melody reminiscent of his acoustic roots. Weiss starts challenging the listener with the next song, however. “Spinning Threads” consists of mathy, stop-go cadences courtesy of drummer Nick Wakim (CSTVT, Stay Ahead of the Weather) underneath melodic guitar lines and Weiss’ earnest vocals.

On the next track, “A Curse Worth Believing,” he allows sustained notes and amp buzz to ring out for over a minute. Thankfully at the end of the interlude is an enjoyable tune with quintessential emo lyrics like “You’re fucking careless / I’m fucking selfish” and “You’re barely breaking and I’m mostly broken.” The refrain for the latter portion of the song will also translate well into impassioned live sing-alongs. From there the album continues on an upward trajectory. On “Spatial Exploration,” Weiss’ emotive vocals deliver existential lyrics on age and change with pop punk energy. After half an album’s worth of distorted guitars and aggressive drumming, the record takes a break with “The Shaking of Leaves,” which has a natural, organic vibe like the title implies. Over acoustic guitar picking and muted tom rolls, Weiss continues his ultra-personal storytelling while also slipping in subtle social commentary.

One of the best songs on the album, “Upstate Blues,” is melodic yet driven, incorporating a multitude of guitar tones and more virtuosic percussion. Weiss ensures the hooks are present as he sings “Upstate blues / They could paint this room / Cold and gray / Like New York and you.” “No Amount of Sound” is a poignant slow-burning emo song opened and closed by the same heartbreaking line “Footsteps / They followed mother’s death / They followed suit and peeled the paint of the walls.” Over and over again Weiss’ songwriting continues to impress, especially on “Obsessive Compulsive Distraction” where he gives us the beautiful analogy, “Falling in focus before landing inside a blur.” The album reaches the height of its sonic experimentation on closer “Contractual Obligation.” Clocking in at almost seven minutes, the track culminates in layers of various guitar parts and vocal parts forming a vast and ambitious soundscape before deconstructing into a capella at the very end.

In between the million other things he has accomplished these past two years, Evan Weiss somehow managed to record an album full of moody, heartfelt tracks perfect for the fall. On Intersections, Weiss returns to the roots of Into It. Over It.’s original recordings while also exploring new directions in his music, achieving two goals where artists normally strive for one. The fact that Weiss is capable of consistently delivering both quantity and quality is a true testament to his pure astounding talent as a musician.